(CNN) -- As Michael Jackson fans and the media pour into Los Angeles, California, for what could be the most widely watched memorial of all time, an obvious question remains: Where will he be laid to rest? 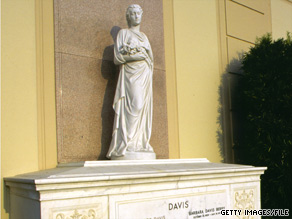 Bette Davis is among the notables buried at the Hollywood Hills Forest Lawn park.

Although the Jackson family hasn't made an official statement, all signs seem to point toward Forest Lawn Memorial Parks and Mortuaries, the not-for-profit organization that has buried a vast number of Hollywood's notables.

Forest Lawn officials were working with the Jackson family on their plans, which were part of "a package" of events Tuesday, said Jim McDonnell, assistant chief of staff of the Los Angeles Police Department on Sunday.

His comments, however, did not answer questions about where or when Jackson would be buried.

There is speculation that the burial will be at Forest Lawn's Glendale location, but the media are swarming around the Hollywood Hills memorial park, located right off the freeway behind Disney Studios. Tito Jackson's ex-wife, Delores "Dee Dee" Jackson, is believed to be buried there.

Forest Lawn Memorial is the first stop tourists make in search of the crypts of Hollywood greats. Numerous books and Web sites such as findagrave.com and seeing-stars.com claim to have insider knowledge about celebrity grave locations on the properties, but Forest Lawn is unrelentingly secretive about who, exactly, is entombed in its parks.

"We hold the privacy of our client families in very high regard," said Bill Martin, spokesman for the Glendale location, which is considered the "mother lode" for celebrity grave hunters. "There are certain areas and property types that have limited access."

The tombs of Sammy Davis Jr., Humphrey Bogart and Jean Harlow are in locked areas not accessible to the general public, according to findagrave.com. With that kind of commitment to privacy, it's understandable why Jackson, known for being reclusive, might be buried there.

Avid grave hunter Lisa Burks, who frequents both the Glendale and Hollywood Hills parks, said she wouldn't be surprised if Jackson were to be buried at either location.

Burks was first drawn to Forest Lawn Glendale because of its artwork and statuary, but once she found out that celebrities were "buried with the regular people," she said, she began to grave hunt.

"We leave flowers and take pictures," Burks said of her time at famous graves. "It's the way of remembering someone who made a difference, who cheered me up when I was a kid or entertained me. With Michael Jackson ... if he ends up at a cemetery, I'll definitely go and take flowers. They feel like a member of the family, so you treat them like a member of the family."

Even if you can't find a way to see your favorite celebrity's crypt, Los Angeles residents said that just stepping foot in the park is an experience in itself.

"I know for some people cemeteries can be intimidating or just where you go to mourn. But at Forest Lawn, it isn't sad; it's really a beautiful place," said Beth Zeigler, an Echo Park, California, professional who frequents the park's museum.

But if you call any of the Forest Lawn Memorial Park and Mortuaries a cemetery, you would be remiss. There are certainly graves behind the Glendale park's majestic wrought-iron gates, but that's where the similarities end. Amid its 300 acres, the park has three churches, replicas of all of Michelangelo's works and a copy of Leonardo da Vinci's "The Last Supper" in stained glass.

Instead of above-ground tombstones, the park uses flat, engraved markers for grave sites, so from afar all you can see are grassy hills. The memorial park draws over a million visitors each year, including 70,000 who come to get married.

Built in 1906 as a traditional cemetery, Forest Lawn was revamped by Dr. Hubert Eaton in 1917. Like Jackson, Eaton was "an icon [of his] time," said Laura Kath, author of "100 Years in the Life of Forest Lawn."

"[Eaton] is the man who first envisioned the memorial park concept, that cemeteries should not be filled with tombstones but should celebrate the life of those entombed there and celebrate the living," Kath said, "and people loved the whole concept. Eaton was a visionary."

"Cemeteries are for the living," Burks said about her visits to celebrity tombs. "We're remembering them. It sounds crazy, but I dare anyone to do it, and I'd bet it would make them feel good."