(CNN) -- Judd Apatow is the man behind many of the most successful comic movies of recent years. 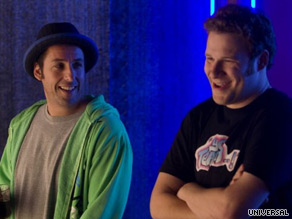 As a producer Apatow's resume reads like an encyclopedia of comedy hits: "Anchorman," "Talladega Nights," "Superbad," "Forgetting Sarah Marshall," "Step Brothers" -- the list goes on. As a writer and director he is less prodigious, though his two efforts so far -- "The 40-Year-Old Virgin" and "Knocked Up" -- have garnered commercial and critical success.

His brand is about as hot as it gets in U.S. comedy these days with his latest offering as director, "Funny People" grabbing the highest share of the American box office with $23.4 million on its first weekend.

The 41-year-old American has an innate understanding of what makes people laugh. A former stand-up comic and writer for television sitcoms like "The Larry Sandler Show," Apatow has taken to heart that old maxim that the best comedy is born out of tragedy.

"The 40-Year-Old Virgin," for example, follows the painful attempts of a socially awkward nerd to lose his virginity, while "Knocked Up" is about a pregnancy resulting from a one-night stand. Contrary to what its upbeat title might suggest, "Funny People" delves into even darker territory. The movie stars Apatow's former flatmate Adam Sandler as a famous comedian who is struck down with leukemia.

"I see all the movies as dealing with my personal problems, whether it's about virginity, bad sex, marital issues, unplanned pregnancy or, in the case of this one, death," Apatow told CNN.

Part of the reason the Apatow brand has grown so strong is his habit of collaborating with the same group of writers and performers. Via his production company he has helped to foster the acting careers of Steve Carell, Paul Rudd and Seth Rogen.

"When someone is really good I don't want to let go of them," he said. "Every time we meet someone new and they're great we think 'I want to use that person on the next one' because it's so hard to find someone that's hysterical, interesting and fun to be around."

Surprisingly, considering their longtime association, "Funny People" is the first time Apatow has helmed a feature with Sandler in it. In the movie, which also stars the director's wife Leslie Mann, Sandler's character is prompted by illness to re-evaluate his life. This leads on a journey of self discovery that takes him back to his roots as a stand-up comic.

To gather material for the movie Apatow, Sandler and co-star Seth Rogen followed a similar trajectory, going to comedy clubs together and, according to Apatow "doing stand-up and bombing."

It was a nostalgic experience for Apatow and Sandler in particular, who shared an apartment in Los Angeles when they were in their twenties and both struggling comedians trying to catch a break.

"A little bit of the movie has some aspect of our repartee," the director told CNN. "But that was a different time. We were really young and hungry and trying to figure out how we were going to be accepted in the world of comics and movies.

"It was very fun and exciting and we slept till noon everyday and had red lobster for lunch. So we always reminisce about that time because we had nothing going on other than our comedy sets at night."