LONDON, England (CNN) -- Vera Lynn, who made her name entertaining troops in World War II after recording her first song 70 years ago, has become the oldest living artist to have a number one album. 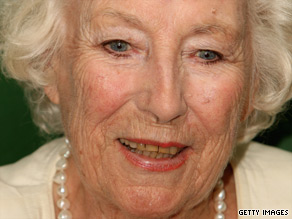 At 92, Vera Lynn is the oldest person to have a number one album.

The 92-year-old's album "We'll Meet Again -- The Very Best of Vera Lynn" took the top spot in the British charts on Sunday, even outselling much-hyped re-mastered versions of the Beatles' back catalogue, according to the UK's Official Charts Company.

The previous oldest living artist to top the charts was Bob Dylan, who at 67 saw his album "Together Through Life" become number one in the UK earlier this year.

"I am extremely surprised and delighted, and a big 'thank you' to all my fans for putting me there," Lynn said, according the UK Press Association.

During the war, Lynn was known as the "Forces' Sweetheart" for hits such as "The White Cliffs of Dover" which struck a chord with British soldiers fighting overseas and audiences at home.

Britain's Queen Elizabeth II awarded the veteran singer the Order of the British Empire (OBE) in 1959 and in 1975 made her a dame.