Why we love those rotting, hungry, putrid zombies 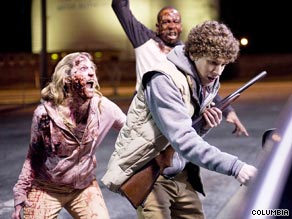 Jesse Eisenberg is pursued by zombies in the new release "Zombieland."

So why, exactly, do we love zombies so much?

According to experts -- and, yes, there are zombie experts -- it's because for all their limitations, the brain-rotted, animated corpses are so darned versatile -- helping reflect whatever our greatest fears happen to be at the time.

"You can't shoot the financial meltdown in the head -- you can do that with a zombie," said Max Brooks, author of the best-selling "Zombie Survival Guide" and "World War Z" -- which is currently in development to become a movie.

"All the other problems are too big. As much as Al Gore tries, you can't picture global warming. You can't picture the meltdown of our financial institutions. But you can picture a slouching zombie coming down the street."

Zombies initially shuffled onscreen in 1932 as the mindless minions of horror movie legend Bela Lugosi in the film "White Zombie." This weekend, they'll chase a shotgun-and-banjo-toting Woody Harrelson through an amusement park when "Zombieland" opens.

They've also starred in video games, music videos, pop songs and books, picking up a devoted, if not obsessive, set of fans along the way.

Since ancient times, monster stories have been used to channel other concerns about life and death, said Andrea Wood, a graduate fellow at Georgia Tech who teaches the course "Apocalyptic Nightmares of the Living Dead" and is working on a book about zombies in popular culture.

But the zombie, she said, offers a uniquely blank canvas.

"Since the zombie doesn't have the long literary tradition of the vampire or a number of other monsters, it allows artists a degree of autonomy to conceptualize the zombie any way they see fit," said Wood.

Early zombie films like "White Zombie" and 1943's "I Walked With a Zombie" stick to the monster's Caribbean voodoo traditions, in which some sort of evildoer uses magic to force the recently deceased to do his bidding.

It's no coincidence, says Peter Dendle, an associate professor of English at Pennsylvania State University-Mont Alto, that such stories emerged during the Great Depression.

"The United States that prided itself on individuality and hard work found itself standing in soup lines," said Dendle, author of "The Zombie Movie Encyclopedia" and other works about the undead. "The terror in Haiti is not so much being attacked by a zombie, but becoming one -- having your life and soul taken from you and placed under someone else's will."

In 1968, director George A. Romero re-imagined the monsters as flesh-eating ghouls, creating the pop-culture zombie identity that exists to this day. In the turbulent late '60s, Romero's zombies helped provide some thinly veiled commentary on race, class and the breakdown of the American Dream.

Since then, zombie movies have given viewers a way to consider, if indirectly, problems such as natural disasters, technology gone awry, deadly viruses and the daily grind of their own lives.

Nervous about warfare and military secrets? Wait until they unleash a poisonous nerve gas in "Planet Terror." Think animal-rights activists go too far? Watch them rescue and release a monkey that spreads the "Rage" virus in "28 Days Later."

And then there's one of the most basic human fears of all, the fear of death.

"[With zombies] we see the process of decay as it happens right before our eyes," Wood said. "They are this kind of perverse manifestation of humans' desire for immortality gone horribly awry."

Brooks, whose third book, the graphic novel "Zombie Survival Guide: Recorded Attacks," will be released Wednesday, said zombies provide a safe and socially acceptable way to deal with those fears.

"It's safe to do something like a zombie walk -- it isn't so fun to do a swine flu walk," Brooks said. "If, at a party, you bring up how you'd survive a zombie attack, you'd be the life of the party. But if you say, 'What would you do if super-AIDS came to America?' you'd clear the room."

Throughout their history, zombie movies have tended to be low-budget affairs. The highest-grossing zombie movie was the 2004 remake of Romero's "Dawn of the Dead," which hauled in about $59 million. That put the film at No. 92 on Horror.com's list of 100 top-grossing horror movies.

But the films often achieve cult-classic status, with fans continuing to watch them decades after they're released.

Whether "Zombieland," with its big budget and high-profile cast, breaks that trend, nobody is expecting tales of the walking dead to ever go away.

"In the early 2000s, I had all but pronounced the genre dead -- there hadn't been a big studio movie in more than 10 years," he said. "I've gone out of that business. I've pulled up my shingle for pronouncing the death knell of the zombie."

After all, like zombies, zombie movies are remarkably resilient (even when faced with shotguns and chainsaws). That's another part of the appeal, experts say -- appeal that can be measured in such things as a 74,000-member Facebook group titled "The Hardest Part of a Zombie Apocalypse Will Be Pretending I'm Not Excited."

To promote his books, Brooks travels the country talking about the undead menace. Instead of questions about writing, he said he often gets asked about the best type of ammunition to kill a zombie or the best way to prepare your house for the coming onslaught.

All About Horror Films