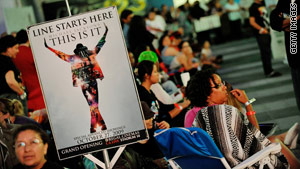 The estates of some dead celebs like Michael Jackson can flourish thanks to fans.
STORY HIGHLIGHTS

The deaths of so many celebrities in recent months have highlighted the continued public fascination with stars -- even beyond the grave -- and the booming industry surrounding dead celebs.

"It's been a crazy year," said Scott Michaels, who runs findadeath.com, a site devoted to tales of dead celebrities, as well as the "Dearly Departed Tour" in Los Angeles, California, where enthusiasts can visit sites of some of the city's most notorious deaths.

"It's weird because even [stars], who are already dead, like Anna Nicole Smith, are back in the news. Death has become trendy."

It's also a gold mine.

"I think that with celebrities, we feel like we own a piece of them," he said. "It's almost like being part of the family."

That family expanded during what some have dubbed the "summer of death."

From May to September, Michael Jackson, Farrah Fawcett, David Carradine, Walter Cronkite and Patrick Swayze all died. The fascination with such celebrities can mean big bucks for their estates.

And if death is the new black, Michael Jackson is poised to become the new arbiter of style.

With the release of the documentary "Michael Jackson's This Is It," and a companion double CD, the legendary pop icon's estate stands to add millions to its coffers. Jackson will join the realm of Elvis Presley, Heath Ledger and John Lennon who rake in the cash and keep fans enthralled even from the grave.

Have you seen "This Is It"? Share your review.

Not bad for a group that is unable to make personal appearances or sign autographs.

Roesler's company represents two stars on the list (Monroe and Dean) and quite a few living clients (people as varied as Scott Baio and boxer Roberto Duran) as part of its roster of more than 300 entertainment, music, sports and historical figures and organizations.

Roesler, who declined to comment on whether he or his company is working with the Jackson estate, said dead celebrities are often less risky for companies to use in marketing campaigns.

"The fact that they are deceased, it's not possible to have any more scandals. Andin today's day and age, companies are becoming less of a risk taker," Roesler said. "Even for someone like Michael Jackson, people have thrown a lot of dirt around Michael Jackson and we all know what that landscape is ... and it's unlikely that anyone is going to bring up anything that would derail any type of major promotional effort." Share reviews of "This Is It"

Some people take their fascination with dead celebrities to the outer limits.

These fans make pilgrimages to the scene of their favorite celebrity's death, their grave, and where they lived. In the case of Elvis Presley, it's the same location, which has made Graceland one of the most popular destinations in the United States.

Michaels' findadeath.com is a favored destination of those who refer to themselves as "death hags."

From visiting grave sites to collecting autopsy photos, death hags are part of a fan culture that can rival a star's fan club in life.

"Stars' lives are pretty spectacular and we followed their careers," said Michaels. "So it makes sense that we follow their deaths."

Why the attraction? Well, death is the great equalizer, said Alan W. Petrucelli, author of "Morbid Curiosity: The Disturbing Demises of the Famous and Infamous."

Petrucelli has a collection of memorabilia which includes photos of some famous people after their deaths: singer Selena, President John F. Kennedy, Marilyn Monroe, Sharon Tate and actor River Phoenix.

"Some people think it's gruesome," Petrucelli said. "People also collect memorial cards and programs if the funeral or memorial service is open to the public. The day after a celebrity dies I go on Ebay and you will see lots of different items available.

"And of course, a star's family can make money off of their likeness," Petrucelli added. "Death sells."

Karen Bard, eBay's pop culture expert, said the site sees an uptick in items related to a celebrity after their death.

Bard said the star doesn't have to be someone who is popular at the moment. While her site was flooded with Michael Jackson memorabilia after his recent death, Bard said there has also been a great deal of interest generated by the sale of the crypt above the final resting place of Marilyn Monroe, who died almost 50 years ago.

"[A death] clearly incites a buying and selling cycle in an accelerated fashion," Bard said. "We see unique things pop up that are always capturing the public's attention and there are people out there willing to buy them."

Alex Roman counts himself among the death devotees. He proudly wears his "Death Hag" t-shirt, visits Hollywood Forever Cemetery -- where several stars are buried -- and blogs about old Hollywood on his web site "Alex Living in L.A."

Roman said he loves learning the history behind the lives and deaths of celebrities, and understands the allure.

"There is a definite fascination and people are drawn to it on many levels," Roman said. "The fascination with death is that it's a frightening thing, yet it is something you are curious about. So there's that juxtaposition that makes it so interesting."

Michael's business has attracted some breathing celebrities. He said he's even given Ryan Seacrest a tour.

As the old saying goes, death is one of only two guarantees in life. And with the number of stars moving on these days, there could be more business opportunities for Michaels and those in his industry.