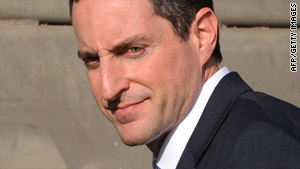 Los Angeles, California (CNN) -- A judge ruled Friday there was probable cause to try Anna Nicole Smith's boyfriend Howard K. Stern and two doctors for involvement in an alleged conspiracy to provide drugs to a known addict.

"Evidence in the record strongly suggests she was an addict," Los Angeles Superior Court Judge Robert Perry said at the end of a 13-day preliminary hearing.

Perry said "there was a widespread and ongoing effort" to obtain drugs for Smith, whom he characterized as a "strong-willed person" intent on getting drugs.

The doctors may have been "blinded by the celebrity of their patient," Perry said.

A defense lawyer said the case could have a chilling effect on doctors who treat patients for pain, since the doctors could be held criminally liable if their prescriptions are deemed excessive.

Witnesses described Smith as weak and "zombie-like" much of the time in the months after September 11, 2006, when her 20-year-old son died in the Bahamas hospital room where she was recovering from the birth of her daughter.

The defendants, who are out on bond, return to court December 11 for arraignment. No trial date has been set.

The 23 charges against Stern and co-defendants Dr. Khristine Eroshevich and Dr. Sandeep Kapoor included three counts of conspiracy to dispense and administer controlled substances to a known addict.

The three also allegedly conspired to use false names to obtain drugs for Smith, a practice defense lawyers argued was intended to protect the celebrity's privacy.

Stern's lawyer, Steve Sadow, argued that Stern should not be charged because he did not know his companion was an addict or that it was illegal to obtain medication with a prescription written out to a false name.

"He's being charged here with doctor-related activities, which doctors have specific knowledge [of] and he's just a layperson," Sadow told the judge.

Prosecution witnesses outlined evidence that the doctors wrote many prescriptions using several names, including Stern's, for drugs intended for Smith.

"One of their theories is that the mere prescribing of medications using a pseudonym is a crime and it's rebutted by the fact that some of the most respected hospitals in this city use this practice to protect the privacy of some of their celebrity patients," Eroshevich defense lawyer Adam Braun said.

Prosecutors argued that Stern used the false names to get double doses of dangerous drugs to feed the addiction of the former Playboy model and reality TV star.

Kapoor's lawyer said prosecutors could make it difficult for California doctors to treat their patients for pain.

"If this prosecution is successful, you can all plan to call the D.A. office every time you ask your doctor for a prescription for pain, because that's going to be the standard," attorney Ellyn Garafalo said.

Perry agreed with Braun's argument that Eroshevich, a psychiatrist, "deeply cared for Anna Nicole Smith and was well intentioned" with her treatment.

"I made that observation," the judge said.

As Eroshevich left the courthouse Friday, she said she had wanted to stand up and speak several times during the three weeks of testimony, especially when the prosecution hinted that she had had a lesbian relationship with Smith.

Perry refused to allow the prosecutors to show photos they said would prove sex as a motive.

The defense lawyers said they had no expectation that the judge would throw out any of the charges, because the prosecution needed to show only a minimal level of suspicion to get the case sent to trial.

They insisted on the hearing, however, as a way to learn more about the case against them.

"We got to see a few of the witnesses to testify," Sadow said. "We got to see the prosecutors at work, all of which is knowledge we will use."

Braun called the hearing "a gift to us."

"We were tickled to death, though, that the prosecutor called some of their best witnesses and gave us a chance to size up their weaknesses and to get ready for trial," Braun said.