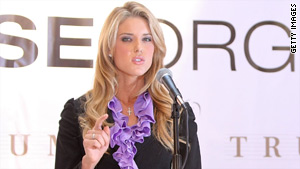 Los Angeles, California (CNN) -- The sudden end to a legal battle between dethroned Miss California USA Carrie Prejean and pageant officials was prompted by the revelation of a "sex tape," according to a source familiar with the lawsuits' settlement.

Prejean was fired in June after lingerie-modeling photos of her emerged that pageant officials said were a breach of her contract. Prejean sued the pageant in August, arguing her firing was religious discrimination because of her opposition to same-sex marriage.

Pageant officials countersued last month, demanding their former beauty queen repay $5,200 in pageant money spent for her breast implants and give them all proceeds from a book she's written.

A settlement of both lawsuits was signed in New York Tuesday, but no details were made public. Lawyers and parties for each side were bound by a confidentiality pledge, according to the source.

TMZ Managing Editor Harvey Levin said during a webcast Wednesday that he obtained the Prejean video during the summer, but found it "too racy" to post on his site. He indicated Prejean was alone in the video.

The source with knowledge of the settlement talks told CNN those details were accurate.

Prejean's lawyer, Charles LiMandri, responded with a short statement issued through an employee at his law office. "It's a confidential settlement, and he can't discuss it," the statement said.

Several calls and e-mail to Prejean's publicist were not returned Wednesday.

Prejean's tell-all book hits bookstores next week, and she is scheduled for media interviews to promote it.

The pageant had claimed that the contract she signed when she entered their competition last year gave the pageant the rights to anything she wrote. The settlement ended that claim.

Pageant officials also dropped their attempt to be repaid for her breast enhancement, which was done before she represented California in the Miss USA competition, according to Henman.

Prejean, in exchange, withdrew her suit accusing the pageant of violating her privacy by confirming to reporters that her breasts were enhanced, Henman said.

"We are moving forward from the past and looking towards the crowning of two winners and the new look of the upcoming Miss California USA pageant, telecast live on November 22," pageant Executive Director Keith Lewis said Tuesday.

"We're back in the business of beauty," he told CNN.

There was nothing pretty about the public fight that began in April when Prejean, 22, stepped into controversy by declaring her opposition to same-sex marriage while answering a judge's question at the Miss USA pageant. Prejean finished as first runner-up.

While state and national pageant officials publicly supported her initially, their opinions eventually changed after she continued to make public statements about same-sex marriage.

She held onto her crown through May, despite a series of questionable photos that emerged on gossip Web sites. Those images showed a topless Prejean, photographed from behind.

She was dethroned in June by Miss USA pageant owner Donald Trump amid growing complaints by state officials that she was uncooperative and not meeting her contractual obligations.

Prejean filed her lawsuit in Los Angeles County Superior Court in August, claiming that her firing was religious discrimination because of her stand against same-sex marriage.

The pageant's countercomplaint said what it called Prejean's belligerent behavior, lack of cooperation and contract breaches caused her firing, not her opposition to same-sex marriage.