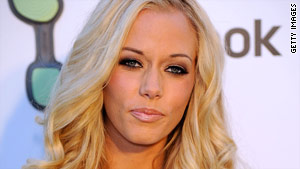 It's a boy for Kendra Wilkinson and husband Hank Baskett.

Their son, Hank Randall Baskett IV, was delivered via C-section at 12:37 a.m. on Friday in Indiana, where Baskett is a wide receiver for the Indianapolis Colts.

Wilkinson, 24, who rose to fame as part of Hugh Hefner's trio of girlfriends on The Girls Next Door, announced the pregnancy weeks before she wed Baskett, 27, in a June 27 ceremony at the Playboy mansion in Los Angeles.

Sharing news of her pregnancy with fans via various TwitPics, the Kendra star expressed her joy -- and choice of baby names -- upon discovering that she would be welcoming a son.

"We've already decided to name our son Hank Baskett IV," she said. "Hank's dad and his grandfather were both named Hank, so it was very important to us to carry on the family tradition."

Wilkinson's due date was Dec. 12. The birth was first reported by E! News.