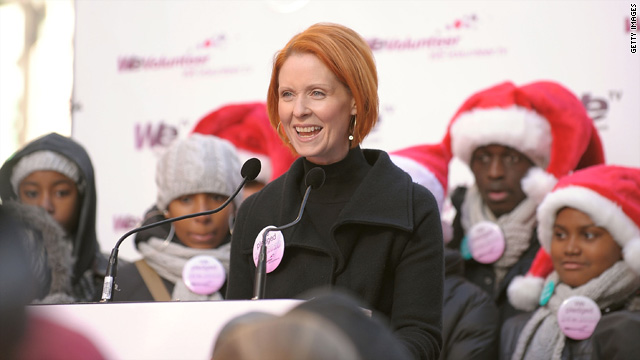 Cynthia Nixon is speaking out against provisions in the House and Senate health care bills that limit coverage for abortions.
STORY HIGHLIGHTS
RELATED TOPICS

(CNN) -- It's been a little more than a week since Cynthia Nixon flew back from filming "Sex and the City 2" in Morocco, and she's already diving headfirst into the debate surrounding abortion and health care reform.

"It's a very basic female right that we need to protect," Nixon said. "What's so frightening about this Stupak ban is that he's found a backdoor way to basically not cover abortion for the vast majority of American women."

The Stupak-Pitts amendment, written by Democratic Rep. Bart Stupak of Michigan and Republican Rep. Joseph R. Pitts of Pennsylvania, is a point of contention in the House health care bill. The amendment would limit funds in the health care bill, preventing subsidies from directly paying for abortions and also from paying for any insurance plan that covers abortions.

The prohibition excludes cases of rape, incest or when the mother's life is in danger.

Opponents of the Stupak-Pitts amendment say it would block women who get government health subsidies from receiving the abortion coverage they may have in their insurance plan now. Critics also say companies that participate in the proposed insurance exchanges (and therefore get government subsidies) will not be able to provide abortion coverage even to women who are paying for their own insurance.

Supporters say those women could use their own funds to buy that coverage separately.

The Senate earlier this month rejected a similar amendment introduced by Sen. Ben Nelson, D-Nebraska. However, over the weekend, Nelson signed on to a Senate version of health care legislation that would neither require nor prohibit insurance plans from covering abortion, but would give states power to prohibit exchanges from providing the coverage.

The Senate version would also cut off public money from paying for abortion coverage.

Under a decades-old law known as the Hyde amendment, federal funds are off limits for abortion services.

Since she returned from Morocco, Nixon says she has been talking to friends to "make sure people know that we're looking at a backdoor loss of abortion access," she said. Her biggest concern is how confused everyone seems to be about the issue, because after a while, "your mind numbs over because you can't follow all the details," Nixon said.

The 43-year-old recently sat down with CNN to discuss health care confusion, abortion politics, and why she believes people on both sides of the debate actually want the same thing: fewer abortions.

CNN: You've been very outspoken in the past few years about LGBT issues and rights, but not as much about reproductive health. When did you start becoming vocal about being pro-choice?

Cynthia Nixon: I've been involved since I was 15, so we're talking almost 30 years now.

My mother had an illegal abortion pre-1973, and it's something that I would never want to face or want my daughter to be facing or any of her friends. Abortion is a right I feel must not go away, and I feel like people aren't mobilizing so much because it's so complicated and it's difficult to understand.

CNN: But some say that all the Stupak-Pitt amendment does is essentially hold up the current law that restricts federal funding from providing abortions.

Nixon: That's patently false. The new people coming in would be people making less than $88,000 a year in a family of four and would be getting their insurance in the form of tax credit. That credit is coming through the federal government.

[For] the majority of women who have health insurance now, abortion is covered as a complete given. Once these new people come in, we're looking at adding 36 million people to these tax credits, and they will not have abortion offered as an option on their health insurance. That's a really large chunk of people, but the thing is also how it will affect the marketplace. ...

They're saying you could buy [a rider] additionally, but for how much? It's going to be exorbitantly expensive, and it's not a thing people are going to do.

CNN: In addition to the issue being complicated, some ... have pointed to a problem of complacency as well. How do you broach this topic with a generation that has always had some sense of reproductive rights?

Nixon: I think we can continue to tell stories about backstreet abortions and how horrible they are. The idea of making access to safe abortions harder and more expensive and more difficult, having to travel across state lines -- that puts women's health and lives in jeopardy, which is something I think no one wants.

CNN: But what about the argument that we shouldn't let abortion politics get in the way of the health care bill being passed?

These women who are going to be insured who aren't presently will be better off, but you're changing the whole nature of the debate for those of us who have insurance. If we start getting our insurance through the exchange -- which as time passes, big companies will be able to start buying, and they will -- so those of us who buy private insurance will not be able to buy insurance that covers abortion.

CNN: Let's pretend for a minute that the health care bill never existed. Was there anything that worried you about reproductive rights before health care reform?

Nixon: The people who concern me the most are the people who want to illegalize abortion, and even more scary to me, they also want to make contraception hard to get. I don't want women to have abortions. The people who really are trying to reduce the number of abortions through sex ed and contraceptive information and distribution, I think they have the exact right idea.

CNN: "Sex and the City" did the now-famous episode where your character, Miranda Hobbes, chose to have an abortion only to change her mind at the last minute. Was there a message in that episode? What was it?

Nixon: The message was choice. Miranda is a fighter. If she had to fight to get to that abortion, if there were forces working against her, she would have fought and fought and fought to get there and she might not have stopped to think, "What do I really want in this situation?"

But she was able to sit there in that doctor's office, about to go have an abortion with the support of her friends, and think to herself, "You know, I don't think this is what I want to do." This should be all about choice. We should not be pushing women to have children they don't want or can't care for.

CNN: Two movies stand out in my mind when I think of reproductive health: "Juno" and "Knocked Up." Both of these movies deal with unwanted pregnancies, but neither touched the topic of abortion.

Abortion is a hard thing for Hollywood to deal with because it is so controversial and you don't want to alienate half your audience by sending one message or the other.

But "Juno" was so great because it was so real. That girl was so real the way she dealt with the situation she was in. She was not happy and she was really bummed, but she was really clear that she didn't want to have an abortion.

It's hard enough. It's a hard enough decision and we don't need to make it harder.