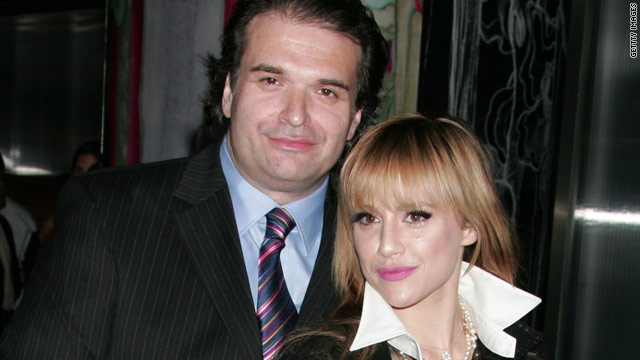 (PEOPLE.com) -- A "devastated" Simon Monjack told PEOPLE his wife Brittany Murphy did not overdose on drugs and did not suffer from an eating disorder.

"These rumors that she was anorexic? It's crazy -- she was slim, but that was her natural physique," Monjack told PEOPLE. "This is what's killing all of us? How did it happen? Her mum, myself and her family -- we want to know why we lost our baby."

During a sometimes tear-filled interview, an exhausted Monjack, 39, who hasn't slept since his mother-in-law found his wife collapsed in the bathroom early Sunday, said all he knows is what doctors told him at the hospital: She died of cardiac arrest, but they won't know details until after an autopsy. (A coroner's spokesperson said the results could take up to six weeks, for toxicology reports to be final.)

"My initial reaction to the autopsy was -- they're going to cut her open -- I couldn't bear it," Monjack said, weeping. "That would break her mother, but we realized we needed to know. I look forward to getting the results."

He added that his wife of three years did suffer from a heart murmur (mitral valve prolapse), which can cause fatigue, dizziness and irregular heartbeats -- but is generally not life threatening. Murphy didn't require medication to treat it, says Monjack.

But on Saturday, he said, his wife was ill, resting in bed all day suffering from laryngitis, which the actress treated with herbal tea, ginger and lemon.

"She was on herbal remedies that wouldn't speed up her heart," Monjack said. "There was nothing here that could endanger her; there was prescription medication in the house for her female time and some cough syrup. That was it."

Asked point-blank if a drug overdose was a possible cause of death, Monjack replied, "I can get rid of that one right now," he said.

Last Saturday, the couple just relaxed in bed, watching three movies as Murphy prepared to cast her vote as a member of the Academy of Motion Pictures Arts and Sciences. They ordered Brittany's favorite takeout -- Thai food -- and ate soup prepared by Murphy's mother, Sharon, who has lived with them for 3½ years.

"She was tired and a little sad because she was sick," Monjack said about Brittany. "She wore her pink Beverly Hills Hotel robe and monkey pajamas. We saw It's Complicated, Public Enemy and The Princess and the Frog.

The couple were joined by Murphy's companion, a pet Maltese named Clara, a Christmas gift last year from Monjack that Murphy named after her favorite silent screen star, Clara Bow. "One of the saddest things is that Clara has looked everywhere for Brittany and can't find her," said Monjack.

Monjack, a photographer, first met Murphy on a photo shoot when she was 13 after she moved to Hollywood with her mother, Sharon. They began dating after being reintroduced at Murphy's 28th birthday party and married a year later.

"So many people have their views of us, but they never met us or sat down with us," he said. "I'm not perfect, but I don't think anyone is ... I am feeling beyond devastated. I was in love with Brittany and Brittany with me."

The couple had plans for 2010: Brittany would continue to work, but she wanted to get pregnant.

"She was an only child," said Monjack. "She wanted a baby. Her big dream next year was to have a child, and we talked about how he or she would look. She'd say, 'They'd better have your eyes and lips and my hair.' "

But Monjack did concede his wife was trying to get heavier. "She tried to gain weight but had one of those metabolisms -- a high metabolism -- but enjoyed food as much as anyone. I wish I could show all the receipts from the take out restaurants," he said.

"We are faced with this ridiculous reality that people out there believe she felt, 'Oh, poor me, I'm fat, I'm thin.' Brittany didn't see beauty as a physical thing, which I'm bloody lucky for," he said with a laugh. "I know there was a disparity in how we looked and I'm no movie star, but she always saw the person."

Monjack said he has been upset by some of the published reports.

"It's horrible -- the death of a beautiful young woman, a Hollywood icon; it has to be explained. It just can't be a tragic accident," he said, trying to explain the headlines. "We don't want to accept that a beautiful young wife and daughter woke up one morning and died a tragic death."

But he's most worried about his mother-in-law. "I don't know if she will ever recover, and I know when she reads all this nonsense about her son-in-law and her deceased daughter, her heart is breaking. She has lived with us and saw the love and support. I hope she stays -- I can't imagine my life without Sharon -- she's my link to Brittany."