How Rourke fought back from the edge

LONDON, England (CNN) -- Mickey Rourke says there is only one person he blames for the spectacular implosion of his career the first time round -- himself. 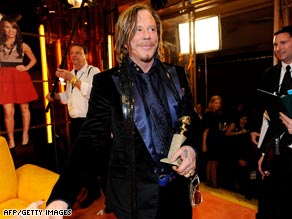 Mickey Rourke backstage at the Golden Globes holding his Best Actor award for his portrayal of Randy "The Ram" Robinson in "The Wrestler."

"You lose your house, your wife, your career, your everything at one time," he says, "You've got to look in the mirror and go 'It's your fault.'"

For a long time it looked like Rourke was destined for obscurity. But, amazingly, he has battled his way back to the top.

It has taken him 15 years, but his critically-acclaimed role in Darren Aronofsky's latest film, "The Wrestler" might finally allow the actor to shake off the notoriety and grab on to the career that should have been his all along.

Despite early promise, Rourke gained such a terrible reputation for self-destructive behavior and on-set antics that, no one in Hollywood would touch him.

He has also been beset by public mistakes and scandal: his ruined face, the arrests and alleged spousal abuse, a short stint as a boxer and some terrible career choices -- he turned down the role of prize-fighter Butch Coolidge in "Pulp Fiction" which was eventually played by Bruce Willis.

Today, a relaxed, expansive Rourke is sitting in sweats in a private room at an exclusive London hotel that is thick with cigarette smoke. The Face, battered during his short boxing career and reconstructed with extensive plastic surgery, is, unexpectedly, less of a train wreck in the flesh, although his moustache does look distinctly stuck-on.

His ever-present pet Chihuahua, Loki, is also there, slumbering quietly by Rourke's side in a tiny gray hooded top. (In his Golden Globes acceptance speech, he thanked his dogs saying, "Sometimes when a man is alone, that's all you've got is your dog.")

Squashed on top of his scarecrow hair extensions is a beanie with the word "indestructible" embroidered across the front. It's not a bad description for the 52-year-old actor. Candid is another one -- especially about the bad times.

"Seeing your entourage leaving with everything they can carry." he says, giving an example of a particularly bleak time, "And you're standing there in the dark with your thumb up your ass."

It is the uncomfortable parallels between the ups and downs of Rourke's life and that of his character Randy "The Ram" Robinson -- a burnt-out fighter, once a crowd-puller, now scraping a living from second division fights in school gyms -- that give particular resonance to the role.

"There was so much of the character ... living in shame, the character being a has-been, it was like it hit me in the face really hard," he tells CNN. He says he also knew director Aronofsky would "want his pound of flesh." "I knew he'd want me to revisit some very dark painful places."

Things started to go wrong for Rourke in 1987, at the height of his fame after explicit blockbuster "9 1/2 Weeks." He says simply that he lost interest in acting and preferred riding motorcycles.

But it was more than that. Alan Parker, who directed Rourke in 1987 film "Angel Heart" is quoted as calling him "a nightmare" and "very dangerous on set."

Rourke puts this down to a problem with authority -- for him "there were no rules" -- and an innate mistrust of the political side of Hollywood. He says it could be to do with being abused by his father as a child.

"You look at some other guy who's making movies and they're calling him a movie star or whatever and the guy can't, he can't carry your jockstrap.

"Because of my temperament and my upbringing I took it real personal and short-circuited."

Whatever it was, Rourke gave up acting and took up professional boxing for four years in the early 1990s and, it seems he was able to fully indulge his self-destructive streak.

By the time doctors told him he must stop boxing, he was suffering from memory loss, poor balance and needed extensive plastic surgery to reconstruct his battered face.

Of course, Rourke's scandals and problems wouldn't be half as interesting if it wasn't for his prodigious talent.

He was one of the last actors to train with the legendary Lee Strasberg at the Actor's studio in New York with Al Pacino, Robert De Niro and Chris Walken and Harvey Keitel.

Early roles had some comparing him to Marlon Brando and De Niro.

He says he has spent the last 13 years going to therapy to deal with his issues -- not a natural place for an "old school guy." "For me it would be easier to talk to a priest than a therapist," he explains, "I was afraid that if I changed I wouldn't be a man."

But, he says he persevered and straightened out "some issues from my childhood." He says he is now a changed man and is being welcomed back into the bosom of Hollywood: he is reprising his role as "Marv" in "Sin City 2," is lined up for a role in Sylvester Stallone's "The Expendables" and is in talks to play a villain in the upcoming blockbuster "Iron Man 2" -- his first major studio film since resurrecting his career.

He's still a bit edgy, though. Even after all the years of therapy. He recently sparked up one of his beloved Marlboros during an interview and, then, of course, he called Sean Penn a "homophobe," as reported in the Los Angeles Times.

Does he ever worry he might throw it all away again?

"I'll never lose it all again," he says, "It was too much hard work to get it back and too lonely and too dark. "I've worked too hard for it. It would be too hard to take."