(CNN) -- While the horrors inflicted by the Nazis during World War II are well documented, "Defiance" director Edward Zwick wanted to make sure the stories of those who fought back aren't overlooked. 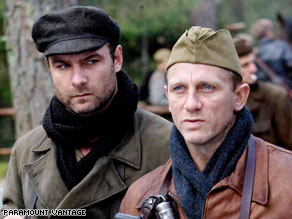 "There is this misperception that the Jews only went willingly to the slaughter," Zwick said. "And in fact, the new history and scholarship tells us that there was so much resistance. This is just one instance."

His new film, which goes into wide release Friday, tells the tale of the three Bielski brothers, who led a Jewish resistance group after escaping into the woods of Belarus in Eastern Europe.

The movie stars Daniel Craig -- best known for his work as the latest James Bond -- Liev Schreiber and Jamie Bell as the trio who took up arms against the Nazis and helped save the lives of more than 1,000 Jewish refugees fleeing occupied Poland.

Portraying a slice of Jewish history was somewhat familiar territory for Craig, who plays brother Tuvia Bielski in the movie. He also co-starred as an Israeli agent in Steven Spielberg's "Munich," the dramatization of the murder of 11 athletes during the 1972 Munich Olympics. Craig said the characters' religion had nothing to do with his interest; both roles were just fascinating parts that attracted him.

"I think someone said, 'You did something similar to that in 'Munich,' " he recalled. "I said, well it's kind of not. It's a different period in history and I don't think religion is something that should hold me back."

Schreiber, who is Jewish, said bringing the story of the heroic yet complex brothers to the big screen gave him "a sense of pride" and he found inspiration in their bravery.

"It was in these guys' DNA," said Schreiber, who plays Zus Bielski. "But I also think that it is in our DNA as human beings ... that courage exists, that passion exists, that tenacity to love exists. It's just that we don't experience the kinds of tests nowadays that they did in the 1930s in Eastern Europe -- particularly if you were Jewish."

Filming in Lithuania just across the border from Belarus added an element of realism to the role, Schreiber said.

"We shot in the woods in the middle of winter, but I think as an actor you're always grateful of these little reminders of where you are and what you're doing, especially when you're doing something on film when it's so naturalistic," he said. "When your hands are frozen and you can barely load a machine gun then you know you're on to something with the character."

Jamie Bell, best known for playing the title role in "Billy Elliot," rounds out the cast as younger brother Asael Bielski. He said the bleak setting helped him understand "the minutiae of what these people actually went through."

Bell had considered himself pretty knowledgeable about the Holocaust and World War II before learning about the project. "But when I read the script I felt kind of embarrassed that I didn't know about the Bielski brothers and about the Jewish resistance across the board," he said.

Heralding the triumph of the Bielski brothers to those who are unaware is just what director Zwick had in mind. He also had a hand in writing the "Defiance" screenplay and is no stranger to heroes in history, having directed the critically acclaimed "Glory." With this new film, Zwick said he found inspiration in the courage displayed by the Bielskis, who were fighting against incredible odds.

"You know, that's what's beautiful about their story," he said. "They were unprepared. They were unsophisticated; nothing they had ever done would have led one to expect that they were capable of this. I think that speaks to all of us: what we are able to find within us that is fine, even magnificent within ourselves when called upon."