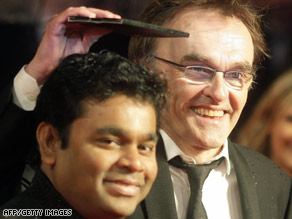 "Slumdog Millionaire" director Danny Boyle shields composer A.R. Rahman from the rain as they arrive Sunday at the BAFTA awards in London.

Not even the drizzle could dampen Danny Boyle's spirits as "Slumdog," his Mumbai-set rags to riches movie phenomenon won a remarkable seven awards at the glitziest night in the UK film calendar.

"You make a film like this and you just hope and pray it will be seen by a few people," the British director told CNN. "And the journey it's been on, the reception it's had around the world, has just been extraordinary." Watch Danny Boyle, Dev Patel and Freida Pinto talking about "Slumdog" on the red carpet.

"I'd like to acknowledge the blood, sweat and tears of our cast," said the film's producer, Christian Colson who accepted the award. "The film you saw is the film Danny Boyle imagined and it's very rare you can say that. He dreamed the dream, 24-hours a day, seven days a week for two and a half years."

Boyle's labors were recognized by the Academy, handing him the Director award, which he can add to the BAFTA he won for debut feature "Shallow Grave" in 1995.

"Slumdog" has touched audiences and critics alike. Boyle thinks the film's extraordinary effect is down to its universal message of hope.

"It's the contrast I think between where the kid comes from and what he achieves," said Boyle. "And he achieves everything on his own terms, and that gives you a kind of hope, really, which we all, no matter how romantic it is, we all need that." Watch Bollywood legend and "Slumdog" star Anil Kapoor talking about the "Slumdog" phenomenon.

"Slumdog" also won the Cinematography, Adapted Screenplay, Music, Sound and Editing awards. Closest rival David Fincher's "The Curious Case of Benjamin Button," which was up for 11 awards, bagged only three.

These included a richly-deserved Make Up & Hair award for the feat of transforming Brad Pitt into an octogenarian baby to tell the curious story of a man who is born old and gets younger as he ages.

Actress Kate Winslet also continued her success streak, scoring the Leading Actress honor for her powerful portrayal of a former-Nazi concentration camp guard in Stephen Daldry's "The Reader." Conversely, Winslet both won and lost the award having been nominated twice in the same category, which included Meryl Streep for "Doubt," and Kristin Scott Thomas for "I've Loved You So Long."

But most eyes were on the actress to see if there would be a repeat performance of the breathlessly incoherent acceptance speech she made at the Golden Globes last month after winning two awards.

"These are really special moments. And I don't want to waste them," Winslet told CNN on the red carpet before going on to accept her award with no tears or obvious emotion. Instead she simply thanked her parents and the late Anthony Minghella and the late Sydney Pollack, two of the film's producers. Watch Kate Winslet talking about her "amazing year" on the red carpet.

Reformed Hollywood badboy Mickey Rourke provided the only mild controversy of the night with a few expletives in his acceptance speech for the Best Actor award.

"Thank you Darren Aronofsky who gave me a second chance after I'd f***ed up my career for 15 years. Such a pleasure to be here, and be out of the darkness," he told the audience.

Earlier, the actor told CNN how things have changed for him since the accolades started pouring in for his extraordinary performance in Aronofsky's "The Wrestler."

"I got a whole bunchy of new friends that I don't need," Rourke said. "But I've also heard from some people that I'd worked with years ago that I'd burned bridges with that have come around.

"It's taken me a long time to change and come back and do things the right way. I'm just grateful for the second chance."

There were also gongs for Spain's Penelope Cruz, who took home Supporting Actress for her fiery scene-stealing performance as an unhinged artist in Woody Allen's "Vicky Cristina Barcelona," and the late Heath Ledger whose chilling reinvention of the Joker in Christopher Nolan's "The Dark Knight" was recognized with the Supporting Actor award.

Now, as attention turns to the upcoming Oscars, "Slumdog's" BAFTA wins will only increase the momentum behind the Best Picture nominee. After success at both the Golden Globes and the BAFTAs, Kate Winslet could also be justified in looking forward to the Oscars with confidence.

All About Movies • Entertainment • Film Awards