LONDON, England (CNN) -- A group of Heath Ledger fans have taken their reverence for the late "The Dark Knight" star to a whole new level. 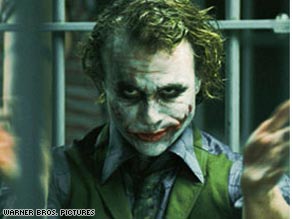 Followers of the actor, who electrified audiences with his chilling reinvention of the Joker in the second Batman blockbuster, are calling for the character to be retired from the movies permanently.

Ledger supporters at new Web site, The Ultimate Joker, launched a petition last week calling for studios to remove the Joker from any future Batman movies. The petition currently has 2,431 supporters.

"We think Heath deserves this honor," the site's team leader, Fer Barbella, told CNN from Buenos Aires, Argentina. "He is the ultimate Joker.

"We are Batman fans from the comics and from the movies," he said, "After we saw 'The Dark Knight,' we thought this Joker was really the best. It deserves to be withdrawn from any Batman sequels.

"When Michael Jordan retired, they withdrew the number 23 jersey as an honor. It's the same thing with Heath."

"He upgraded the character in a thrilling way," he said. "Although a lot of actors would love the chance to play the Joker, as Batman fans and now Heath Ledger fans, we think no one could ever perform it as well as he did."

The Web site is the brainchild of Barbella, 34; Nico Pimentel, 33; and Natalia Rodoni, 33, all advertising creatives in Buenos Aires.

The trio say that if they collect enough names, they may go to the studio to present their petition.

"As soon as we start seeing that we have more than 50,000 names on our Web site, perhaps we will go to the Warner Brothers gate and do a bit of activism," Pimentel said.

The huge buzz around Ledger's performance as the Joker last year stemmed from his update of the iconic character played by camp comedian Cesar Romero and as a hateful clown by Jack Nicholson.

Ledger's Joker was a very different proposition from those that had come before: In a ripped, stained suit, with clown makeup smeared across a scarred, twisted mouth, his Joker was a nihilistic, sociopathic prankster. "Why so serious?" he sneered in a performance that received rave reviews from critics globally. Do you agree that Heath Ledger's Joker should be the last one ever?

The actor was found dead after overdosing on prescription drugs at his apartment in New York on January 22, 2008, shortly after concluding work on "The Dark Knight."

Barbella says that the Web site and petition are their award: "The Academy gives an Oscar," he said. "This is a new award from the people. A user-generated award."