BEVERLY HILLS, California (CNN) -- Cameras click as members of the media shout, "Look this way please!" and "Over here!" while pushing at each other to get the best shot. 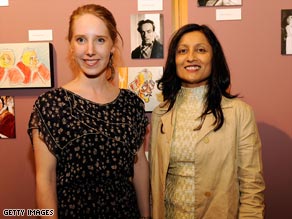 The pair they're focusing on seems almost blinded by the flash of lights. But they smile agreeably until a publicist drags them across the room to a video crew, where a reporter shoves a microphone in their faces.

It's not Oscar night yet, and the two men aren't big name celebrities. Alan Smith and Adam Foulkes are the directors of the animated short film nominee "This Way Up," and they're soaking up the spotlight at the Academy's Shorts! reception in Beverly Hills, California.

The short film categories -- animated and live-action -- are among those Oscar slots that rarely garner attention, such as makeup or sound mixing. The nominees range from Pixar's newest animation director to foreign filmmakers to a group of college students.

"It's just such a more democratic process of filmmaking," Smith said. "You don't need massive studio funding to make shorts -- although it helps."

Foulkes agrees. "It's so much more of a diverse selection. It's important that [these categories] exist because these are the people who will be making the features in the future."

David Frankel, host of the Shorts! program, knows the path from short films to features well. Frankel, who had been a TV writer in the '80s and early '90s, won an Oscar for his short film "Dear Diary" in 1996. A few weeks after accepting his award, he received a call from Tom Hanks. Hanks offered Frankel a job and that job led to a long working relationship.

Frankel most recently directed "The Devil Wears Prada" and "Marley & Me."

"It all started with the Oscar," Frankel said. "You should look out for all of [the nominees] because I think that anyone who has gotten this far has enormous talent and is capable of great, great work."

Steph Green and Tamara Anghie, director and producer of "New Boy," are among the few female nominees in a field that tends to be dominated by males. Green got the idea for "New Boy" after reading a short story about a young African boy's first day at school in Ireland.

"There is a specific kind of poetry in the short film," Green said. "You know, when someone tells you a good story, it's not an hour and a half. It's 10 minutes of your life. There's something really wonderful about being able to laugh and cry or feel something real in that short amount of time."

The pair hope their Oscar nomination will open many doors in the future, providing them with the opportunity to speak with people who might not have answered their calls before, Anghie said.

Doug Sweetland, director of Pixar's animated film "Presto" -- the animated film about the magician and rabbit that preceded showings of "WALL-E" -- said he's happy to still have a job. He's been animating with Pixar since "Toy Story," although this film was his first directing opportunity. He said he wants to continue pursuing directing and animation and is humbled by the attention his nomination is creating.

"The real truth is I end up taking credit for way more than I deserve," Sweetland said, glancing around. "I like to think that I'm simply representing everyone on the crew that killed for the short and made it completely awesome."

Sweetland said he hopes only to retain consciousness on the day of the Academy Awards. And if he happens to win?

"I have no idea. I really try to think about that moment as little as possible." iReport.com: Who do you think will win?

For Green and Anghie, the whole nomination process has been a roller-coaster ride -- one filled with twists, turns and lots of "shiny objects," Green said.

"There's a dreamlike, surreal aspect to this nomination, which I'm thoroughly enjoying," Anghie said. "I'm wondering if I'm going to wake up and feel like it all has been a dream. And I'm hoping that the aftermath of it all is still going to be glorious."