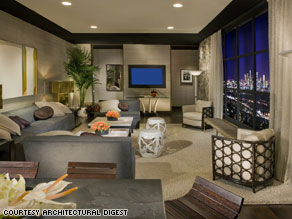 Stephen Shadley's Oscar green room was inspired by his renovation of a 1970s home.

Now Shadley is in Tinseltown for a different kind of industry-related project: designing the Architectural Digest green room -- the backstage area where stars can relax while the show runs -- at the 81st Annual Academy Awards.

"I've sort of been captivated by the movies," Shadley said, warming up after landing in Los Angeles less than an hour before. "It's something I've always enjoyed."

Shadley's design was inspired by his recent renovation of a 1970s home. "It was time to go back to a period I actually remembered," he said. The design includes an 11-foot couch, an 1,100-pound bar, a drop-down ceiling and a magnificent shag rug.

"It's the 1970s. You've got to have the shag rug," said Adrienne Kauderer, the magazine's promotions director.

Kauderer walked through the half-finished room Tuesday as production workers scurried around her. The magazine's crew had two days to finish building the entire space from scratch. And it's bigger this year, as Kauderer pointed out. An extension of the green room will allow access for presenters not walking down the red carpet.

Gallery: Take a tour of the green room »

There were several other requirements for Shadley's design. The room had to have certain seating, spacing, and include advertisers' products.

But the focal point for the room is one of Shadley's personal touches. The panoramic view of Los Angeles from the Hollywood Hills comes from the very studio at 20th Century Fox where he had his first job.

"I'm hoping it will transport people a little, give them the illusion that they're actually in this [spacious] room, rather than a green room backstage," Shadley said.

The designer kept the room's color palette monochromatic in order to provide a simple backdrop for its occupants' gowns. Although smaller than you would imagine a setting for the stars, its elegance -- even in the beginning stages -- speaks volumes.

"I want to try to make people feel rested and comfortable and glamorous because they're going out to do the most glamorous thing on earth -- presenting an Academy Award," Shadley said.

All About Los Angeles • Academy Awards