Hugh Jackman ready to be 'drunk and nude' at the Oscars

LOS ANGELES, California (CNN) -- This year, the Oscars are on Hugh Jackman's shoulders. 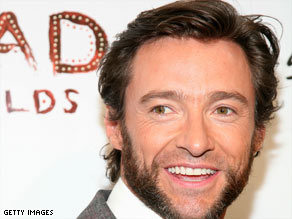 Hugh Jackman plans to offer viewers "a good time" at the Oscars. He hosts the big show Sunday night.

The Australian actor, who earned rave reviews for his hosting of the Tonys, now has the Academy Awards to contend with.

It's a job that's put Jon Stewart, Chris Rock, Whoopi Goldberg and David Letterman on the firing line, with only Billy Crystal and Johnny Carson emerging more or less unscathed in the last couple of decades.

But with typical verve -- after all, this is the guy who won a Tony for playing song-and-dance man Peter Allen in "The Boy from Oz" -- Jackman cracks jokes about the task, telling ABC that one of his distinctions is that he's the "tallest" Oscar host in recent years.

Watch Hugh Jackman talk about doing it the Australian way »

Even if he's not having a good time, you may not want to get in his way. After all, this is the guy who's played the fearsome, sharp-clawed Wolverine in the "X-Men" movies and gets a solo turn as the superhero in the forthcoming "X-Men Origins: Wolverine."

Jackman talked with Anderson about musical numbers, Heath Ledger and performing "drunk and nude." The following is an edited version of the interview.

CNN: Are you feeling any nerves, or is it just pure excitement at this point?

Hugh Jackman: It's more, it is more excitement. I'm not impervious ... there has been moments in my life where I've been nervous going on stage, that's for sure, and I know I'll have a butterfly or two, cause yeah, you wanna have a couple. But ultimately, the way I see it is if I'm not going to have a good time, then how can anyone else have a good time. You know, you're the host -- it's not really about you. Ultimately, it's your job to set the tone.

Watch Hollywood prepare for the Oscars »

CNN: And the butterflies give you a little bit of adrenaline, I would expect.

Jackman: Yeah, and I'll be drinking from about 9 a.m., so that's why I'm impervious.

CNN: Now you're a triple threat [a dancer, actor and singer]. I need confirmation on a couple of things. Are you doing a musical number with Beyonce?

Jackman: Oh, that's a good question. Look, I'm old school, I don't want to give too much away. But I didn't fully deny it, did I? There's going to be some surprises, that's for sure.

Jackman: OK, I'll give you that. Yes, they're going to be up on stage.

CNN: This is really a reinvention of the Oscars this year. The ratings have been low. Traditionally a comedian hosts the show. How do you feel about being part of the reinvention this year?

Jackman: I'm thrilled and honored, and that's honestly how I feel. I don't worry about the ratings or anything like that. I'm really excited by what is planned for the night, and I can tell you it's different. It really is different. I mean having someone as tall as me is a big change. ... It's really not going to be funny at all.

No, but there's so many things I love about what they're doing with the show. Forget ratings, you should always reinvent -- you should always be doing something different. What this night is going to be about is spontaneity. We're going to set an atmosphere that will allow things to happen that you won't expect.

And the other thing that I and the creators wanted to keep at the top and forefront of the night is that it should only happen on that night -- whatever happens, it could only happen on Oscar night, and only this year will it happen. So there's going to be some things in there where you're like, "Oh!"

CNN: How daring is it going to be? Will there be YouTube moments where people will be talking about the Oscars this year after it happens?

Jackman: One of my favorite moments at the Oscars was when the streaker came across David Niven. And we're upping it a level and we're just going to do most of the show naked. Um, well, there hopefully will be YouTube moments.

CNN: "The sexiest man alive" [is] going to be up there nude?

Jackman: Drunk and nude, yes. So that's our new fresh approach. It's the Australian way.

CNN: Are you going to work that "sexiest man alive" title into the show?

Jackman: There's a few jokes floating around. Of course I will be about 8 feet away from two-time sexiest man alive Brad Pitt, so yes, there's great temptation to use something there.

CNN: And political jokes -- will there be many of them that you will work into the act?

CNN: OK, so lots of surprises. You've got experience with award shows, how is this different than hosting the Tonys?

Jackman: The Tony Awards is watched by more people in the theater than at home on television. So, the Oscars, it's slightly different, there's about a thousand here [in the theater] and a billion out there.

But really, if I hadn't done the Tony Awards, I'd be a hell of a lot more nervous. I mean I'm trained as an actor, that's what I do, it's not like I'm trained to be a host. But having done that, the thing that I think surprised me more than anything was how much fun I had because anything can happen. You're always amongst people who are, they're pros. There's people out there, and if you played with them, they'll generally play back, and that's the thing I like about it.

CNN: Heath Ledger was a fellow Australian. Do you think [it will] be a fitting tribute for him to posthumously win an Oscar?

Jackman: You know of course, I can't help [but] feel sentimentally for him to be recognized. I think everyone recognizes his talent, his contributions. He was a friend of mine -- I knew him -- so I would love him to get that kind of public recognition. His family will be there; I can't help but feel that will be great. So that's the only category that I will give my preferences.

I have a few others. I've had a few little sly bets going. I've got to talk to all those people backstage: Hey, I thought you should have won!

CNN: How do you balance your home life with your busy schedule?

Jackman: You abandon your family at this point in time. Literally, they're in New York. People have said, "Oh, is the family coming out?" and I've said [to my family] don't bother coming -- I leave at about 7 in the morning and I get home at about 11 at night, so right now it's Skype. God bless Skype.

CNN: The kids are understanding?

Jackman: Yeah, they're cool. My son, who's named Oscar by the way, he goes, "You know what the headline should be? 'Oscar's dad hosts the Oscars.' " And I was like, that's pretty good. Yeah, he'll stay up and watch it. iReport.com: Who do you think will win at the Oscars?

All About Hugh Jackman • Academy Awards