Pinki brings a smile to the Oscars

(CNN) -- While all eyes seem to be on "Slumdog Millionaire" for the Oscars, one very courageous little girl will be focused on another India-based film at the ceremony. 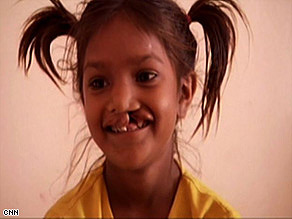 Pinki, like millions in developing countries, had to live with her deformity and suffer the social consequences.

It's called "Smile Pinki," and it's up for an Oscar, too -- nominated for best short documentary, which it won on Sunday.

The little girl watching it from inside the Oscar ceremony has traveled all the way to Los Angeles, California, from her small Indian village with her dad -- and it has been an incredible journey for Pinki Sonkar.

"Smile Pinki" tells the story of her transformation from a sad outcast to a vibrant 8-year-old with plenty of spunk.

Pinki was born with a cleft lip, and her impoverished family did not have the money for corrective surgery.

Like millions of other children born with the lip deformity in developing countries, Pinki simply had to live with it and suffer the social consequences.

Watch how Pinki was transformed by the operation »

"Pinki was a depressed, sad, lonely, shy, young little girl, growing up on the periphery of the society in a little village," said Satish Kalra, director of Smile Train's South Asian region, after meeting with Pinki.

The little girl's own family was ashamed of her, Kalra says.

But all of that has changed. Pinki is now a real pistol, full of energy and confidence, and she has a fantastic smile too -- thanks to the Smile Train charity.

Smile Train teaches doctors in their own countries to operate on cleft lips, a deformity afflicting up to four million children across the world. iReport: Share your Oscar predictions

Pinki just happened to be one of the chosen candidates for surgery and was also chosen to be the subject of the documentary.

The film chronicles her transformation, following her from her village to the hospital and home again.

The film's director is Megan Mylan. She has won several awards but not an Oscar -- until now.

For Pinki and her dad, being able to see the film's director win an Oscar would be a thrill.

But they know they already have the greatest prize: Pinki's new smile.

"I am so happy that my daughter's lips have been repaired," her dad Rajendra said with a smile, expressing hope that the movie will inspire people to help children whose families can't afford the surgery.