(CNN) -- Before the storm hit and the floodwaters took over, Kimberly Rivers Roberts pulled out her new video camera. 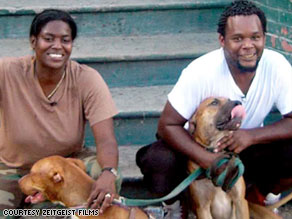 The aspiring rapper and her husband, Scott, were among those trapped in the Ninth Ward in New Orleans, Louisiana, in late August 2005 as Hurricane Katrina raged toward them.

The couple, who've described themselves as street hustlers, compiled amateur footage that captured the horrors experienced in their community and among their neighbors. From the middle of rising waters in attics where people waited to the struggles to find help from and for others, they documented what outsiders couldn't see.

About 1,300 miles away, in Brooklyn, New York, documentary filmmakers Tia Lessin and Carl Deal sat glued to their televisions.

"After a few days of seeing people stranded on roofs, we had to do something," said Lessin, who with Deal had previously worked with Michael Moore.

Watch Lessin and Deal talk about how the film was made »

So they set out, planning to do a film about New Orleans National Guardsmen. But when that was shut down -- " 'Fahrenheit 9/11' screwed it up for all you guys," she remembered hearing -- they found what she called "an unexpected gift" in Kim and Scott, whom they met 10 days after the storm.

The home video material, coupled with archival news footage and film verite capturing the couple's journey, led to the documentary "Trouble the Water," which won the Grand Jury Prize at the 2008 Sundance Film Festival and is up for an Oscar at this year's Academy Awards.

Lessin and Deal, who both directed and produced this documentary that took two-and-a-half years to make, spoke to CNN about their Ninth Ward collaborators, their own experiences and the impact the film's made.

CNN: Tell me about meeting Kim and Scott. Did you know right away that you were on to something?

Tia Lessin: We were in a Red Cross shelter in central Louisiana -- that's where we met the subjects, the hero[es] of our film. They'd been on this five-day journey out of the city to higher ground. ... Everyone had a story to tell, but their story really rose to the top.

Carl Deal: They called themselves "street survivors." Kim said the most support and help they ever got from the government were the skills to survive on their own. They were used to not getting assistance. ... It's a slap in the face for those of us who come from a more privileged place. ... And the home video, it enabled us to ground the film in this inside point of view.

CNN: I can't imagine what it was like to work on this. What was this experience like for you?

Lessin: Originally the film was fueled by a sense of outrage. What it became, I guess, was something a little different. It's really about hope and survival. We were inspired by Kim and Scott's journey, and their commitment to do something different in their lives. The voices on 911 calls, we think about those people all the time, and there's no way to know what happened to them. What keeps us up at night now is that people are still struggling. Levees are still vulnerable, there's a lack of affordable housing, lack of jobs. Schools are a dismal failure. Tens of thousands of people can't return home. We hope in this new administration, things will happen.

CNN: What did you hope this film would inspire in terms of emotion and action?

Deal: We want to challenge people, when they see it, to think about themselves and the impact they can have in the community and the world.

People respond to this film in different ways. We screened at the Democratic National Convention in Denver. Mayor [Ray] Nagin [of New Orleans] came to the screening and walked out after a few minutes. Sen. [Mary] Landrieu, had a completely different response and tearfully embraced Kimberly.

Lessin: We get hundreds of e-mails from strangers every day, about how they're using the film in classrooms, in churches, on college campuses to organize trips [to volunteer] in New Orleans. They're inspired to act.

All of America, our hearts went out [after Katrina]. There's still a real connection. People want to know what's happening. They care deeply about the story and are appalled the Bush administration did so little and hope the Obama administration does better.

CNN: How much do you think politics, and issues popular to the time, influence Oscar wins?

Lessin: I would hope that the best film wins. It's an extraordinary pool of nominees. [That said, "Trouble the Water"] does resonate. It's about people who beat the odds and survived. And that's what we're all trying to do. Kim and Scott showed us how to do it with grace and dignity.

CNN: I imagine the film's success has in many ways turned Kim and Scott's lives upside down. How are they doing today?

Lessin: They're rebuilding their community. They started a record label, Born Hustler Records. Kimberly is carnival royalty [at Mardi Gras]. They're hometown heroes, as well they should be. They're living where they weathered the storm, but they're in a no-flood zone. iReport.com: Who do you think will win?

All About Hurricane Katrina • Academy Awards