The top looks on the Oscars red carpet

(InStyle) -- While the Academy of Motion Picture Arts and Sciences has been celebrating film's best and brightest for more than 80 years, the glamour we associate with the Oscars truly started in the 1950s, when stars such as Audrey Hepburn, Grace Kelly and Janet Leigh brought high style to the ceremony. 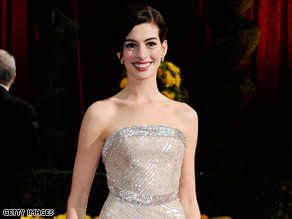 Anne Hathaway accessorized her Armani Prive gown with more than $1 million worth of Cartier jewelry.

Since then, the red carpet has been a can't-miss staple of the evening, and Hollywood's hottest stars work with fashion designers, wardrobe stylists, jewelers, hairstylists and makeup artists to create looks they hope will go down in fashion history.

This year's show was no exception, and high-wattage stars such as Anne Hathaway, Kate Winslet and Natalie Portman walked the red carpet in stunning couture gowns. Here are just a few of our favorites:

• Best actress nominee Anne Hathaway made the most of her big night, arriving in a champagne-colored strapless Armani Prive gown that glittered with paillettes and Swarovski crystals. When the "Rachel Getting Married" star turned to give an over-the-shoulder pose, she revealed an unexpected onyx and black crystal dragon brooch, which was affixed to the back of her gown. Diamonds are always in fashion on the red carpet, and the actress accessorized with more than $1 million worth from jeweler Cartier.

• Best actress nominee Kate Winslet looked as stunning as ever in an asymmetrical Atelier Yves Saint Laurent gown and Chopard jewels. Despite her picture-perfect appearance, the Oscar winner for "The Reader" admitted, "I'm extremely nervous!"

• "Slumdog Millionaire" beauty Freida Pinto continued her winning awards season style streak in a John Galliano royal-blue gown made of silk tulle with delicate embroidery and metallic beading. The 24-year-old, who said an enthusiastic hello to her parents in India from the red carpet, wore Martin Katz jewelry, including a ring set with a 150-year-old diamond from her native country.

• In a sea of red and white dresses Natalie Portman stood out in an orchid gown by Rodarte, vegan heels by Stella McCartney and a vintage Rialto clutch. The actress' minimal Kwiat jewelry and elegant updo highlighted her flawless skin. Portman was truly an Oscars triple threat, making our best dressed, best hair and best makeup lists.

Other colorful bests included Sarah Jessica Parker's Dior Haute Couture gown, which we loved not only for the shade (which she described as "barely mint, maybe seafoam") but also for its impressive size. Best supporting actress nominee Amy Adams was stunning in a crimson silk and satin gown by Carolina Herrera and a jaw-dropping, jeweled collar necklace by Fred Leighton (as seen on Beyoncé in the November 2008 issue of InStyle!).

And Heidi Klum's bright red dress was not only glamorous, but also charitable: For the second year running, the "Project Runway" host partnered with The Heart Truth campaign to raise awareness of women's heart health by wearing red.

Last year, Klum wore a custom red dress by John Galliano for Dior that was auctioned off for charity, and this year she hit the carpet in a red silk taffeta gown from RM by Roland Mouret. The stylish supermodel accessorized with a diamond and ruby bracelet charm of her own design that will be part of a giveaway on dietcoke.com.

In total, the best-dressed women of the night span 28 years, from 16-year-old Miley Cyrus to 44-year-old Marisa Tomei. See all of our favorites, including Amanda Seyfried and Vanessa Hudgens, on InStyle.com.

All About Academy Awards