Behind the scenes at the Academy Awards

In our Behind the Scenes series, CNN correspondents share their experiences in covering news and analyze the stories behind the events. CNN's Jay Kernis reports on what it was like inside the Kodak Theatre at the Academy Awards. 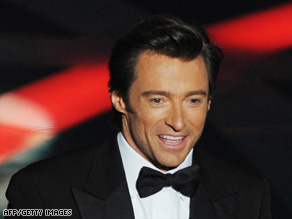 Hugh Jackman, the host of the 81st Academy Awards, speaks to the audience at the Kodak Theatre on Sunday.

LOS ANGELES, California (CNN) -- When you're at home, you can sit back and be critical. When you're inside the theater, the whole show seems to work, especially the big production numbers.

Maybe it was a particularly well-produced show this year, but when you're in the audience, you feel part of it -- even way up in the second mezzanine.

I've been at the Oscars to cover them, but this is the first time I've ever been inside the ceremonies. I was there with my 17-year-old son, Noah.

When you arrive on the red carpet, you enter a security tent and show your ticket and driver's license.

You notice that the tent is bisected by red velvet ropes and, with a friendly and practiced technique, celebrities are moved to the left of the rope and others to the right.

This way, celebs leave the tent closer to the cameras and the fantasy that you might have that everybody in a gown or tux are somehow equals on one night sort of disappears.

View scenes from the Oscars »

If you ever were curious about what happens during the commercial breaks: Stagehands with really powerful flashlights guide the changing of the sets and curtains; they make sure empty orchestra seats are filled; host Hugh Jackman introduces his parents; they show a short film about the power of the movies that got cut from the show in progress; Jackman hands his wife a plate of cookies, thinking she probably was hungry; and he later points out that the guy playing the cello on stage in the Academy Award Orchestra was actor Dermot Mulroney. Who knew?

Watch a report on the night's big winners »

The show was best when it demonstrated that Hollywood can still do what it has always done well: getting your attention and holding it -- seeing five Best Actors presenting Oscars on the same stage was pretty amazing. So is Best Actor Sean Penn's self-awareness.

The Oscars can still astonish: They still know how to put on the big musical number, with a hundred dancing performers in top hats, moving with Busby Berkeley precision.

They still know how to break your heart: Heath Ledger's parents and sister received his Academy Award and said that they did so in celebration. But I bet they'd rather have had him accept it.

And for all of the breathtaking special effects that Hollywood can muster, for all the star power in the theater last night, there was something remarkable about seeing Philippe Petit in person -- the wire walker who, in 1974, hovered between the World Trade Center towers for 45 minutes.

There was something joyous about watching him balance an Oscar statue on his chin.

All About Academy Awards