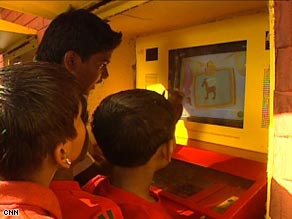 Delhi children crowd around one of the "Hole in the Wall" computers.

The "Hole in the Wall" project discovered that youngsters were able to teach themselves to use the machines embedded in a wall in a poor neighborhood, offering new insights into the abilities of children's minds.

As in "Slumdog Millionaire" -- in which a poor Mumbai youth accumulates the knowledge needed to compete in a game show -- the disadvantaged Delhi children showed they had untapped potential. They displayed the curiosity and imagination to make use of the computer when given access and opportunity.

Among them, 12-year-old Rahul Tivari didn't know how to use a computer when he first saw the kiosk of five machines that suddenly appeared in his neighborhood six years ago.

"I don't have a computer," Tivari said. "I came here from the beginning and I learned by watching others."

Another, Shabanam, 9, is virtually glued to the keyboard whenever she gets a chance.

"There are very nice games in this thing," she says in her native Hindi, not fully realizing the program she calls a "game" is actually teaching her English.

Project co-founder Rajendra Pawar says he is proud of what has happened since the program started six years ago.

There are now 48 "Hole in the Wall" computer kiosks across Delhi and the program has spread across the country and into other parts of the world.

But Pawar says the project's organizers are still pushing for more in the name of free education for children.

"In 1999 there were more than a 100 million kids who were outside the school system," Pawar said. "We were trying to say can we push technology to do the role that a teacher does because these 100 million kids don't even have teachers."

Right now, the computers are hooked into monitoring devices so that scientists can watch and learn about the children's behavior.

They found that When kiosks are introduced to neighborhoods, children typically push and shove trying to get to the computer.

But a change in social behavior is swiftly apparent. The children begin to organize themselves so that everyone gets a chance to use the machines.

As with any new toy, there was great concern that the computers would be damaged, but the children seem to look after the machines without any prompting.

"They protect it because they know if it breaks they can't use it anymore," project co-founder Pawar said.

There is a technician the children can call if the computers malfunction and the machines are placed behind shutters overnight.

The scientists are now working on innovative ways to hook up the computers to give the children access to the Internet. They are expected to install software to restrict the children's access to questionable Web sites.

But their remain obstacles to the project, not least shortages of electricity and money, but with government funding help, it is moving forward.

As for the children who get free access to the computers seven days-a-week, eight hours-a-day, there is never enough time to learn.

Shabanam's eyes glow when she explains how much fun she is having on the computer. "I come here everyday, that's why I am happy."