MUMBAI, India (CNN) -- On Sunday night, Azharuddin Ismail and Rubina Ali were in Hollywood, California, getting celebrity treatment as eight Oscars were awarded to the movie they starred in, "Slumdog Millionaire." 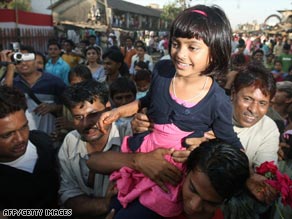 Rubina Ali, who starred in "Slumdog Millionaire," is greeted by crowds in Mumbai, India, on Thursday.

Thursday night, the two children were sleeping at home in Mumbai, India. Azharuddin sleeps under a plastic sheet in a shantytown beside a railway track, where the smell of urine and cow dung lingers in the air. Rubina sleeps with her parents and siblings in a tiny shack beside an open drain.

The slum they live in put on a Bollywood-style welcome for the two young stars. There were music, dancing, sweets, garlands, security -- tears and tantrums -- and paparazzi.

Mumbai's Garib Nagar area, which translates literally into "poor district," put on a robust show for two of its own.

Rubina and Azharuddin have lived in a Mumbai slum all their lives. They were handpicked by the producers of "Slumdog Millionaire" for parts in the movie, which tells the rags-to-riches tale of a young boy who grew up in a Mumbai slum.

Following the film's spectacular success around the world, the producers decided to include the two young actors in the movie's Oscar experience.

The children made their first journey on a plane when they were flown to Los Angeles, California, to attend the awards ceremony. "The plane was so big," said Rubina. "I'd only seen [planes] in the sky earlier and it used to look so small."

"America was just fantastic," Rubina gushed, visibly excited after she made a dramatic entry into the slum on her father's shoulders on Thursday afternoon. "I was so excited to be on stage at the Oscars. Everyone was crying."

Red-carpet formalities done, the children were given a whirlwind tour of Los Angeles. The highlight -- a trip to Disneyland. "I loved all the rides, especially the fast ones," said Rubina.

The trip to the United States did have some drawbacks though. "The food is different over there," said Rubina. " I didn't like it. I missed Indian food."

They'll have plenty of that now that they're back home. The first thing Azharuddin did when he returned to Garib Nagar was to dig into a plate of biryani, a traditional Indian meal of meat and rice, at a restaurant. His mother, who accompanied him to Los Angeles, spoke to reporters at home -- a makeshift shelter under a tree, with a torn plastic sheet for a roof.

See where the children live »

She said she hoped the "Slumdog Millionaire" experience would change things. "It would be nice to get a proper home." She says she has heard rumors the government may provide her family with one, but no one has confirmed any plans for a new home. "I've been praying for a new home for so long. It's all up to Allah now."

Returning to their slum, Azharuddin and Rubina were excited -- and exhausted -- by media attention that was sometimes a little overwhelming. Azharuddin burst into tears while eating lunch, leaving his biryani unfinished, his every move caught on camera.

Hoping to secure a future for Azharuddin and Rubina, the film's producers have enrolled them in a school and set up a trust fund to ensure their welfare.

"We thought long and hard about how best can we benefit them and we decided to put in place an education plan for them," said Danny Boyle, the movie's director. iReport.com: One iReporter's personal 'slumdog' experience

"We put them in school, a very good school, which they're paid for to stay in until they're 18. If they stay in school until they're 18, a substantial sum of money is released to them then, which will effectively change their lives for the better," Boyle said.

The Telegraph newspaper of London, England, quoted their parents saying Azharuddin was paid less than $2,500, and that Rubina got about $700.

"I hope the children get a better life after this," said a neighbor who waited outside her home all day to welcome the children home. "They've achieved so much at a young age. They deserve much better."

All About Academy Awards • India • Mumbai