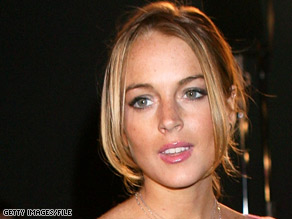 Lindsay Lohan was placed on three years' probation after being convicted of drunken driving in 2007.

A police official told CNN on Saturday that officers will be on the lookout for the actress-singer until she does so.

It wasn't clear why Lohan was being sought, but the warrant, issued by a Los Angeles Superior Court judge in Beverly Hills, apparently stems from her 2007 convictions for drunken driving, Beverly Hills police Sgt. Mike Foxen said. She is serving three years' probation for those convictions.

"We're hoping that she will turn herself in," Foxen said.

Calls to Lohan's publicist and manager have not been returned.

Lohan was arrested twice in 2007 on driving under the influence charges, with a cocaine possession charge in the second incident.

The first arrest in May came after Lohan lost control of her Mercedes-Benz convertible and struck a Beverly Hills curb.

Just two weeks after checking out of a Malibu drug and alcohol rehab facility, she was arrested again in July 2007 after a woman called Santa Monica police saying Lohan was trying to run her down in a car.

A judge sentenced Lohan to three years' probation after she entered guilty and no-contest pleas to the charges. She served less than two hours in jail.

Lohan's acting career, which started at age 10 on a soap opera, took off on the big screen a year later when she played identical twins in Disney's "The Parent Trap."

Since then, she has starred in at least a dozen movies, including "Mean Girls" and "Georgia Rule" with Jane Fonda in 2007.

Her pop music recording career, boosted by her movie roles, has floundered. She last released an album in 2005.

All About Lindsay Lohan • Drunk Driving