LOS ANGELES, California (CNN) -- Someone stole an "incomplete and early version" of the next installment in the blockbuster "X-Men" movie series and posted it on the Internet this week, according to the studio that owns the billion-dollar film franchise. 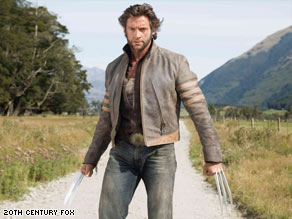 Hugh Jackman stars in "X-Men Origins: Wolverine." An early version of the film was leaked to the Web.

Twentieth Century Fox said the FBI was investigating who leaked "X-Men Origins: Wolverine," which is set for release in U.S. theaters May 1.

The digital file quickly spread across the Internet and was available for free, but illegal, downloading from hundreds of easily found Web sites.

"The source of the initial leak and any subsequent postings will be prosecuted to the fullest extent of the law; the courts have handed down significant criminal sentences for such acts in the past," the studio's statement said.

Removing the pirated files from the Internet may prove an impossible challenge, an industry source said. This source did not want to be named because of the sensitive nature of the matter.

Although the studio said it was removed from the Web site that first hosted it, the digital file has probably been downloaded tens of thousands of times, the source said.

"It's not removed from the Internet," the industry source said. "It's still there."

Twentieth Century Fox downplayed the value of the pirated copy, noting that it was not the final version.

"It was without many effects, had missing and unedited scenes and temporary sound and music," the studio said.

Online movie reviewer Kent Lundblad said he was given a copy by a friend just hours after the rough "Wolverine" first appeared on a Web site Tuesday afternoon.

"Even in this rough form, it's much better than the last 'X-Men' outing or anything Fox has given us in a long, long time," Lundblad said in a review he wrote after watching it.

He said the movie is a rough cut, using placeholder images in many sections and special effects that look like "video games 12 years ago."

He said he suspects that the final movie will look much different than the pirated version, with scenes that were re-shot.

Lundblad, a 25-year-old who describes himself as "a total nerd," said he will see the movie at its midnight premiere May 1. He bought his ticket weeks ago online, he said.

Steve Zeitchik, who covers the film industry for The Hollywood Reporter, said the studio's biggest concern may be that having people view a rough cut "completely throws the studios off their game" of building a positive buzz for the movie.

"If people see this movie, and they don't like it, and they tell their friends, and their friends blog about it, and it just spreads throughout the blogosphere, there are a lot of people that don't even get near a pirated copy of this film, who don't go see [the movie in theaters] because of this leak," Zeitchik said.

Whether the leaked video will eventually hurt the film's box office earnings "is very difficult to discern," according to CNN's source.

Investigators have several tools to help find the source of the leak, including digital watermarking, the studio said.

"We forensically mark our content so we can identify sources that make it available or download it," the studio said.

An FBI spokeswoman confirmed that the agency is "working with the studio and investigating the alleged online compromise of the movie."

The Motion Picture Association of America, the film industry's main trade association, confirmed it was also helping in the probe.

All About Movies • Hugh Jackman