(CNN) -- Woody Harrelson defended his clash with a photographer at a New York airport Wednesday night as a case of mistaken identity -- he says he mistook the cameraman for a zombie. 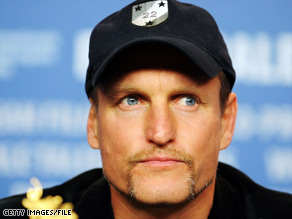 Woody Harrelson says he got into a clash with a photographer because he mistook him for a zombie.

The TMZ photographer filed a complaint with police claiming the actor damaged his camera and pushed him in the face at La Guardia Airport, according to an airport spokesman.

"We're looking into this allegation and if it's warranted, we'll turn it over to the proper authorities," said Port Authority of New York and New Jersey spokesman Ron Marsico.

The photographer, who was not identified, captured the encounter on a small camera after his larger one was broken.

Harrelson, who is being sued by another TMZ photographer for an alleged assault in 2006, did not deny his involvement.

"I wrapped a movie called 'Zombieland,' in which I was constantly under assault by zombies, then flew to New York, still very much in character," Harrelson said in a statement issued Friday by his publicist.

"With my daughter at the airport I was startled by a paparazzo, who I quite understandably mistook for a zombie," he said.

TMZ.com posted two videos of the incident, including one recorded by the larger camera before it was damaged.

The first video shows the photographer following Harrelson and his daughter down an escalator and out of the terminal. It ends with Harrelson apparently reaching for the lens.

The second video begins with the photographer accusing Harrelson of breaking his camera.

After Harrelson returns the camera to him, a scuffle appears to ensue.

The photographer continues to follow Harrelson for another four minutes as the actor and his daughter walk to the airport parking lot. At one point, Harrelson again turns toward the cameraman.

"I'm being chased by Woody Harrelson while I'm talking to you," the photographer says as he talks to an unidentified person on a cell phone.

"He hit me in my face, he broke my friggin' camera, he broke the camera in pieces," he said.

Harrelson, his daughter and a driver get inside an SUV and the encounter ends.

In the movie "Zombieland," Harrelson plays "the most frightened person on Earth" looking for refuge from zombies, according to the Internet Movie Database

Filming on the movie wrapped in Atlanta, Georgia, on Wednesday, according to director Ruben Fleischer's Web site.

TMZ photographer Josh Levine filed a lawsuit against Harrelson last year for an alleged attack outside a Hollywood nightclub in 2006.

Video of that incident, which is also posted on TMZ.com, also appeared to show Harrelson grabbing a camera and clashing with the photographer.

Los Angeles prosecutors declined to press charges against the actor, but Levine filed a suit last summer asking for $2.5 million in damages.

"Woody Harrelson has a history of anger management issues with people and we intend to put a stop to this," Cyrus Nownejad, Levine's lawyer, said Friday.