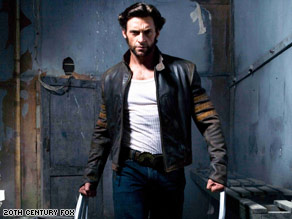 It's obvious why that might be fascinating to the actor playing the role. But as for the rest of us, well, you have to figure the writer left it out for a reason.

But these days we're seeing a lot more "origin" stories as the studios milk each franchise for every last drop, and thus arrives "X-Men Origins: Wolverine," about the blade-wielding character Hugh Jackman plays. (Jackman, no dummy, has a producer credit on the film.)

You can be sure that someone at Twentieth Century Fox will be running the numbers Monday with a view to fast-tracking a sequel to this prequel, as well as further putative episodes devoted to Jean Grey, Cyclops, Storm, Mystique and the rest of the class of X.

Based on "Wolverine," it's hard to get excited about the prospect. The film exhibits all the overly familiar hallmarks of the 21st-century comic book movie: an inflated sense of its own importance, turgid plotting and action sequences designed to showcase lavish CGI effects.

In many ways, it was the first "X-Men," back in 2000, that set the tone. On the one hand, director Bryan Singer embedded an earnest allegory about prejudice and minority rights; on the other, it was an FX geek's wet dream. Each mutant came with her or his own gimmick: One could shapeshift; another could levitate; yet another had a bad case of wind.

The mutants all shared the same nasty temper, but Logan/Wolverine (Jackman) had the shortest fuse -- and the silliest haircut, a '50s ducktail with ferocious rockabilly sideburns. Predictably enough, "Origins" devotes more time to exploring the roots of his anger issues than his hair, but it doesn't worry about where his most distinctive genetic features might have come from: the retractable claws that spring from his knuckles when he's irked and his invulnerability to anything short of decapitation.

In "Wolverine," Logan has lost his taste for war in Vietnam after more than a century as a fighting man (or mutant) and finally walks away in disgust from the elite mutant unit put together by Col. Stryker (Danny Huston). But his brother Victor (Liev Schreiber) has other ideas and knows how to get Wolverine to embrace his true, animalistic, nature.

Borrowing wholesale from "The Incredible Hulk," with Schreiber fairly effective in the Abomination part, "Wolverine" struggles to establish an identity of its own. The two brothers charge at each other like medieval knights jousting, and Victor -- also known as Sabretooth -- affects a dog-like, four-legged bound. But no matter how often he tries it, director Gavin Hood ("Tsotsi") never works out how to make a fight between indestructible foes tense or exciting.

That's the trouble with CG-enhanced action: What you gain in spectacle, you lose in impact. Filmmakers today can engineer destruction on a scale that would have been unimaginable 20 or 30 years ago, but it's all so much collateral damage. It's rare, these days, for an American action movie to impart any genuine sense of pain or hurt or loss. Too much Wow, not enough Ow!

In fairness, there are fleeting moments in "Wolverine" where we do feel Logan's emotional anguish. But they're only as a prelude to his anger, which is the only quality an audience is likely to find interesting about him.

Serviceable but inescapably redundant, this "Wolverine" movie does just enough to keep the "X-Men" franchise on life support, but the filmmakers will have to come up with some evolutionary changes soon if it's going to escape X-tinction.

All About Hugh Jackman