CANNES, France (CNN) -- As award-winning Iranian film-maker Bahman Ghobadi walked down the Cannes red carpet for the premiere of his new feature Thursday, the real star of the show was conspicuously absent. 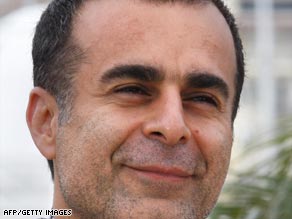 Iranian filmmaker Bahman Ghobadi, director of "No One Knows About Persian Cats," which was co-written by Roxana Saberi.

American-Iranian journalist Roxana Saberi, credited as co-writer and executive producer of the faux-documentary "No One Knows about Persian Cats," was still in Iran, having been released from jail only days earlier.

The woman Ghobadi describes as his fiancée was freed from prison last Monday after being jailed on espionage charges following a one-day trial that was closed to the public.

She had served three and a half months, not all time served, of her eight year sentence and at one point was on hunger strike.

"For four months, she was in prison. For me, four months is like four years," Ghobadi told CNN. "In there, what did they do with her? How did she live in there?"

"I couldn't understand why the government sent her to prison," he continued. "She is like an angel. She is really so clean. I believe her. For example, if you ask me about my mum and her, I believe her first."

After much to-ing and fro-ing by the Iranian authorities, Ghobadi says he couldn't believe it when he found out Saberi had finally been freed, before the end of her sentence.

"When [I found out] she was free ... I couldn't understand," the 40 year-old director told CNN. He said it felt as if the the authorities were playing games with himself and other supporters of Saberi as they gave different timescales for her release -- "two weeks, four years, eight years."

But just after the pair were reunited Ghobadi -- who won Cannes' first-time film-maker award the Camera d'Or in 2000 with "A Time For Drunken Horses" -- had to leave for the French film festival.

"Persian Cats," which chronicles the hardships facing young rock musicians as they seek to evade censorship from the authorities, had been selected to play in the Un Certain Regard slot.

Although Saberi was unable to be with Ghobadi on the red carpet, Ghobadi says she have kept in close telephone contact since her release, checking on how the film has been received.

He thought about leaving Iran because he felt unable to work and cites Saberi as the inspiration behind "Persian Cats," which was filmed in Tehran.

Shot illegally in just 17 days using a small, cheap digital camera -- the state owns all 35mm equipment in Iran, according to film industry trade magazine, Screen International -- the faux-documentary chronicles the hardships facing two young musicians who are trying to put together a band.

The story which combines comedy and tragedy to great dramatic effect showcases music and performances from real musicians who are part of the Tehran underground music scene.

It is estimated that there are 2,000 illegal bands in Tehran, all practising and performing in a hidden world of hand-built recording studios in basements and rooftops around the city.

Ghobadi says that he feels some responsibility for Saberi's time in prison because she stayed in Iran to help him with "Persian Cats:" "She wanted to go back to the U.S. [She] just stay for me and for my film and help for this film and give me the idea for the music."

Ghobadi wrote an open letter in April this year calling for Saberi's release when she was jailed after initially being arrested buying a bottle of wine, describing her as being caught in a "game of politics."

"My Iranian girl with Japanese eyes and an American ID, is in jail. Shame on me! Shame on us!" he wrote of Saberi, who has a Japanese mother, in the letter.

Saberi was jailed on January 31 this year, tried on April 13 and sentenced on April 18 to eight years. Her appeal was on May 10 and she was freed the next day.

Now, Ghobadi says, he is planning to go to New York this week to be with Saberi, who is currently staying in Vienna with her family.

They both plan to write books and then, maybe, do another film together. Ghobadi says he wants to start a family and get married to Saberi as soon as they can.

But first they will take a few weeks to process everything that has happened: "We need the time," he says.