In the most high-profile amalgamation of Indian and western talent yet, Academy Award-winning actor Ben Kingsley stars with Bollywood superstar Amitabh Bachchan in a drama about a pair of maths geniuses. 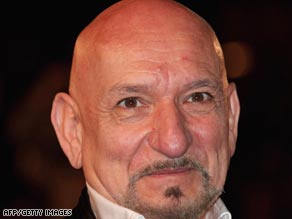 Ben Kingsely who stars in "Teen Patti" is the first Academy Award-winner ever to take a role in a Bollywood movie.

Bollywood-produced "Teen Patti" ("Card Game") also marks Kingsley's first return to Indian filmmaking since playing the title role in "Gandhi," the critically-acclaimed biopic of the Indian leader that propelled him to fame in 1982.

He is the first Oscar-winning Hollywood actor ever to star in a Bollywood movie, and Kingsley believes that the future of filmmaking could lie in combining the twin talents of the world's biggest film industries.

"I think the two talents put together could be extraordinary," Kingsley told CNN in Cannes where he was promoting "Teen Patti."

The 65 year-old English actor maintains that western cinema is suffering from a lack of originality and "heart," with many films just ending up as a "copy of a copy of a copy."

He thinks that the Indian approach to filmmaking can give western productions the infusion of originality they need -- and that filmmakers in India can benefit from "the technology, and the casting opportunities, the directorial opportunities of the west."

"Teen Patti" is set in India and the UK, where Kingsley shot all of his scenes, and uses English and Hindi dialogue. The drama, which cost a mere $7 million to make, will have its world premiere in Mumbai in August.

It tells the story of a university professor, played by Bachchan, who schools five of his most able students in the finer points of high-stakes gambling. The film's plot is reported to be similar to "21," the 2008 Kevin Spacey drama, based on the story of the MIT Blackjack Team.

Indian production company Serendipity Films, which was launched in 2003 by Ambika Hinduja, a member of one of India's richest families, is behind the picture.

One of the company's central projects is cultural-fusion projects, like this one. The company is aiming to enter the big league by investing $50 million over the next three years in projects which bring together Indian and western talent. Do you think that Bollywood can make movies for a western audience? Tell us below in the SoundOff box

Kingsley says he has wanted to be associated with mainstream Indian film ever since he made "Gandhi" -- an Indo-British production and so not "entirely an Indian film"-- with director Richard Attenborough in India.

The actor who is acclaimed for performances in "Sexy Beast" (2000) and "Schindler's List" (1993) says he wanted to know what it would be like to work with an Indian director -- Leena Yadav, "who was amazing" -- and a huge Indian star like Bachchan.

Bachchan's deep voice and brooding persona changed the face of Hindi cinema in the 1970s. Up until then Bollywood screens had been populated by wisecracking loverboys -- the trademark Indian hero in the 1960s. Today, he is best-known for hosting the Indian version of "Who Wants To Be a Millionaire" ("Kaun Banega Crorepati").

Kingsley says that while on set, he and Bachchan "circled each other like hunters."

Despite his respect for the Godfather of Bollywood, Kingsley refused to socialize with the star: "Because my character in this film is discovering Bachchan's character and if it's all frittered away in social 'bla-bla' there's nothing left to discover."

Kingsley's Indian connection goes back even further than "Gandhi." The British actor was born Krishna Bhanji to an English mother an Indian father and adopted his British name while at drama school.

He is also busy producing his own films as part of SBK Pictures, the production company he founded in 2007, as he says, "putting into practice all the things that one has learnt along the way."

The company currently has five films in development, one of which is a drama about native Indians called "Whispers Like Thunder."

For Kingsley, producing is a chance to have some control over the filmmaking process that isn't possible as an actor.

"It's tragic when [a film] just misses," he told CNN. "If you'd made a slight adjustment in your casting, or your writing, or your director of photography or the rhythm of editing, it could have been absolutely perfect."