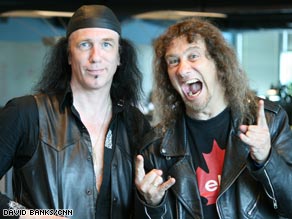 Robb Reiner and Steve "Lips" Kudlow have never given up on playing rock 'n' roll.

He may be right.

Anvil still played, but it was a far cry from the mid-'80s, when the band did a Japanese show with Whitesnake, Bon Jovi and the Scorpions and became a model for groups such as Metallica and Anthrax -- bands that had far more success than Anvil.

Gervasi followed the group on an ill-fated European tour, watched them make an album with a name producer, and saw Kudlow and Reiner fight and make up, fight and make up, as they have since they were 15 and swore they'd rock forever.

Watch Kudlow and Reiner talk about their passion »

The result is a documentary, "Anvil! The Story of Anvil," that's earned rave reviews, is gradually rolling out across the country -- and has reawakened interest in Anvil.

At times, "Anvil" invokes the spirit of "This Is Spinal Tap" -- besides Reiner's you-can't-make-this-up name, the guys even visit Stonehenge -- but, as Cinematical.com reviewer James Rocchi writes, the film's comedy is cut by an unflinching honesty. Watch "American Morning" host -- and former music reporter -- John Roberts talk to Anvil

The enthusiastic Kudlow and laconic Reiner came by CNN Center to talk about the film, their inspirations and why they've always been successful. The following is an edited version of the interview.

CNN: What was the reaction when Sacha came to you and said he wanted to do a documentary on Anvil?

Robb Reiner: My initial reaction was that this was going to be cool, but I wasn't really sure if anybody would care. After Sundance, I knew that this thing was going to be very successful. ... [It got] standing ovations. At that point, I knew something was coming.

CNN: The film, fairly or unfairly, has been presented as a real-life "Spinal Tap." Is that fair?

Kudlow: It was purposely done.

Reiner: It's fair. What can you say? We're a heavy metal band. My name is Robb Reiner. [The director] is the other Rob Reiner, and Spinal Tap is the fake Anvil.

But, outside of that ... it was a Trojan horse to lead people into this. Realistically, we're not like Spinal Tap, and the movie's nothing like it either. It's a spin that's been created by the media, and we've just been having fun with it.

CNN: A lot of times when a director sets out to make a documentary, the people who are in the documentary say, "You cut this out, you changed this." It's like a reality show. Did Sacha do this, or is it pretty much what you see is what happened?

Kudlow: It's pretty much what you see is what happened.

Reiner: They shot 320 hours of footage. The whole movie is a one-take movie. They just filmed everything ... they could have made five different movies out of the footage they had.

Reiner: Well, maybe three and a half.

CNN: What was the first record you heard that said, this is the direction I want to go?

Kudlow: The Beatles and the Rolling Stones, obviously ...

Reiner: For me it was Black Sabbath, Deep Purple, Grand Funk, Cactus, bands like that. Jimi Hendrix ...

CNN: There's that funny bit in the movie in which you [Lips] talk about meeting Reiner by observing, "I heard this guy playing Cactus." And then later you met [Cactus drummer] Carmine Appice.

Kudlow: And how do you get foreshadowing in a documentary? You don't. It's just that's the way things played themselves out. That's what I mean by kismet. It's as if the screenwriting were done by God. The stuff fell into place by itself.

CNN: It's easy to make fun of a band -- or make a tragedy out of a band -- that doesn't quite make it. But back in the '80s, you were playing in front of tens of thousands of people. Even if it had ended then, you say in the movie that you've had the kind of success you were always hoping for.

Reiner: We've been successful a lot as far as we're concerned.

Reiner: We've been touring for 30 years.

Kudlow: Most of the magic that's involved here is the fact that we've always kept our guns loaded. We've always been prepared. And it's always staying on top of it and being ready for the opportunity when it came. And when Sacha contacted us after not seeing us for a number of years, it's not like we'd thrown in the towel or done anything like that. ...

Reiner: The music got us here. There would be no movie if the music didn't mean anything, or hadn't meant something.

Kudlow: You wouldn't get testimonials from some of these people if the music didn't mean something. We did make a difference. We were an influence. And we've always known that. And part of that is the fuel.

CNN: Are you tying in concerts with the movie?

Reiner: It's called the Anvil Experience. We show the movie and we play right after, in the theater. We've been doing that for the last two months throughout America, and it's like metal Beatlemania.

CNN: There was another album due ...

Reiner: "Juggernaut of Justice" is our next album. It's written, and we're just going to record at the end of the year and release it next year. We were going to keep rocking whether this movie came along or not. This movie is a rocket launcher to the mainstream, and here we are.