LONDON, England (CNN) -- For "Coco Avant Chanel" director Anne Fontaine, there was only one actress who could play Coco Chanel in her biopic about the legendary couturier -- French actress Audrey Tautou. 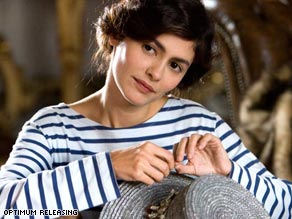 From the way she holds her cigarette to Coco's famously sharp gaze, Tautou is a dead-ringer for the young Coco.

"She is perfect for the part," Fontaine told CNN. "She has this determination and authority."

Fontaine, who also wrote the script for "Coco," says the film would have been impossible without Tautou: "For me, it was the beginning of the story to have a good interpretation of Coco -- if not, I wouldn't have written the script."

But, while Tautou's unmistakable similarity to Coco Chanel made her an obvious choice for the role, the striking actress says she wasn't interested in doing a "birth to death" biopic of the designer.

"It seemed to me that the period when Coco was building herself and asserting her personality is the most interesting in her life," says Tautou who rose to international prominence in quirky 2001 drama, "Amelie."

It was Fontaine's vision that finally convinced the 32 year-old actress to take on the role: "When Anne explained how she intended to treat the subject, I immediately agreed," Tautou told CNN.

"She knew she was predestined for this role," says Fontaine. "She has this 'little black bull' side to her, a grace, finesse, and an irrefutable charisma."

"Chanel looked at everything. Her culture was not one of knowledge, but a culture of observations," says Fontaine.

It was during this time Coco's own style and creativity began to blossom -- partly in disgust at the unnecessary extravagance of upper-class style during the gaudy years of the late Belle Epoque in France.

Designers of the time projected their image of the ideal woman onto the corsets and elaborate hats they created for them to wear. Coco rejected that ideal, opting to build a style based solely on herself, liberating the female body from the constricting style of the time.

"She's the beginning of the modern woman," said Fontaine.

Unlike other recent film forays into the fashion world, "Coco Before Chanel" is less about the clothes and accessories and more about the intellectual and philosophical evolution of one of fashion's greatest minds.

"Coco" stops short of telling the story of Chanel's darker years in Nazi-occupied Paris during WW2, when she took up residence at the Ritz Hotel and was criticized for her affair with Hans Gunther von Dincklage, a Nazi officer.

It is one of two films about the iconic couturier's early life this year. The other, "Coco Chanel & Igor Stravinsky," a lavish, part-fact, part-fiction portrayal of Chanel's brief affair with the avant garde composer directed by Dutch-born Jan Kounen was the closing night film at this year's Cannes Film Festival.

Fontaine also had to add an element of fiction to her telling of Chanel's early years, taking liberties with the script to get some of Chanel's most iconic designs into the film.

The blue-striped mariner's sweater Tautou wears in one scene didn't actually come into being until the 1930s, and the quilted sewing pouch, which in the film, prompts the idea for Chanel's world-famous bag was not the true inspiration.

Fontaine also includes the death of Chanel's great love, the British industrialist Boy Capel (played by Alessandro Nivola), which took place in the years after those shown in the film, because of the huge impact his death had on the designer.

"It was the most important love of her whole life," the 49 year-old Luxembourg-born director told CNN. "When he's dead, when he disappears, something breaks and she only has the work."

That Chanel never married has been attributed to her heartbreak over Capel's tragic death in a car accident. Indeed, Coco herself once said, "I lost everything with the loss of Capel."

Tautou's portrayal of Chanel's broken heart in the scenes around Capel's death may be her finest. It is almost as if the actress becomes the young Coco Chanel.

"The portrayal was not in the costume, not in the superficial side of the character, but in [my] inner self," says Tautou. "In the last part [of the film], I was completely her."

Fontaine and Tautou both acknowledge the biggest challenge of making "Coco Before Chanel" was doing justice to one of the most well-known and influential women of the 20th Century.

"The most difficult thing when you speak about somebody who's so known, so legendary, is to be true to her," said Fontaine.