MUMBAI, India (CNN) -- Bollywood's recent financial growth has been as dizzying as the swirling dancers, colorful costumes and pulsating music that typify the industry's films. 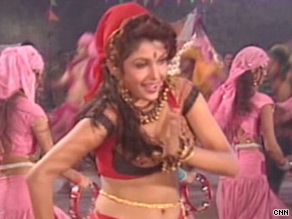 Foreign money has poured into Mumbai's flamboyant Hindi-language film industry, which churns out more than 1,000 films each year. Twice as many films as Hollywood -- and for a fraction of the cost.

But a financial drama has arrived on the movie sets and production suites of India's largest city courtesy of the world economic downturn and a producer's strike -- fewer films are being made; less tickets are being sold and money is suddenly tight.

"It's become more difficult now to green light films; to be able to think of developing films," Nikhil Advani of People Tree Films who works as both a producer and a director told CNN.

"Today you think twice how you're going to be able to put that thing together before you commit any money to it."

It's the new reality: Money that was gushing into the market from abroad to finance films a year and a half ago is now just trickling in.

Production of Bollywood movies has only just resumed, having ground to a halt for seven weeks due to a producer's strike. The strike is finally over, but money is still tight and this is affecting the number of films going into production.

"The number of movie projects has come down by almost 30 percent," Farokh Balsara, a partner at business consultants Ernst & Young told CNN. Balsara heads Ernst & Young's media and entertainment division in Mumbai and looks at trends in the market.

What's more, after several years of fast-rising film revenues due to India's exploding middle classes who were willing to spend, Bollywood finds itself back on a budget.

If you don't have a solid financial plan these days, getting funding for a film is nearly impossible. Throwing around a known filmmaking family name and getting a star signed up won't cut it anymore. "The easy finance is a thing of the past," Balsara told CNN.

Some producers are asking big name talent to take a cut in their pay or at least get paid on the "backend." In other words, waiting until the movie releases -- if it does well you get a piece of the pie; if not, you eat it.

In some cases, accountants are actually on movie sets crunching numbers daily to make sure the budget is on target. "They are getting into daily audits," Balsara said.

The thought of an accountant on set might make some producers shudder, but many believe the slowdown has done Bollywood a favor.

"Is that a good thing or a bad thing?" says Advani of the changes the slowdown has forced on the way he produces upcoming films. "I think it's a very good [thing]."

He currently has several in the works: an animated film in post-production called "Ab Dilli Door Nahin" and a gritty action-packed thriller "Basra," named after the Mumbai street term for heroin.

"I think what has happened is it's corrected itself, because I think Bollywood or the Indian film industry was going absolutely crazy last year."

Mairi Mackay contributed to this story.