LONDON, England (CNN) -- Arriving at the London premiere of his self-titled mockumentary dressed in an enormous bearskin hat, cropped red army tunic and barely there hot pants, flamboyant Austrian fashionista, "Bruno," paid sartorial tribute to the British as only he knows how. 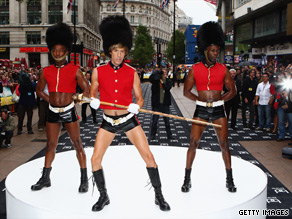 Waxed to perfection and flanked by a group of muscular black men dressed like a camp Queen's Guards, the gay fashion reporter flounced down the carpet to greet his public.

"Vassup CNN! Lookin' hot," Bruno said to CNN. "I don't want any attention; I'm not here to promote my movie."

"Bruno," which hits cinemas in most territories next month, is the latest comic creation of British comedian Sacha Baron Cohen, who last shocked, insulted and delighted audiences in 2006 with Borat, Kazakhstan's "Most Famous Broadcaster."

Watch "Bruno" on the red carpet »

His specialty is characters who say the unsayable: like Bruno's carpet quip that his new film is "the most important movie starring a gay Austrian since 'Terminator 2,'" in joking reference to the married (and firmly heterosexual) Austrian Terminator star, Arnold Schwarzenegger, now Governor of California.

Baron Cohen puts his creations in real-life situations and uses them to draw unsuspecting participants into letting well-hidden prejudices slip out, engage in embarrassing behavior or contradict themselves.

Characters like Bruno and Borat "essentially work as a tool," Baron Cohen told UK paper The Observer in a rare out-of-character interview: "By himself being anti-Semitic, he lets people lower their guard and expose their own prejudice."

Baron Cohen's approach courts controversy. "Borat: Cultural Learnings of America for Make Benefit Glorious Nation of Kazakhstan" opened to a wave of outrage from race-relations campaigners. This time it is gay-rights campaigners who are up in arms.

"Sacha Baron Cohen's well-meaning attempt at satire is problematic in many places and outright offensive in others," Rashad Robinson, senior director of media programs for the Gay and Lesbian Alliance Against Defamation told the New York Times.

While some critics may suggest that his films may reinforce prejudices, others disagree.

"It is difficult to accuse Cohen of making films that are racist or homophobic," Aubrey Day, Editor-in-Chief of Total Film magazine told CNN.

"He takes characters and exaggerates them for broad comic value, but I don't think there's any credence in the idea that he supports any of those ideals."

But Baron Cohen certainly knows how to manipulate the media. The 37-year-old has been whipping up anticipation for "Bruno" with a series of attention-grabbing, hilarious stunts.

In September last year, he brought chaos to the hallowed fashion shows of Milan when he stormed the catwalk of designer Agata Luiz de la Prada's show dressed in a Velcro suit with clothes from backstage stuck all over it.

Most recently, he descended from the ceiling at the MTV Movie Awards wearing nothing but a pair of angel's wings and a skimpy thong before "falling" onto irate rapper Eminem's face. Eminem stormed out of the awards but later admitted he knew about the stunt beforehand.

"Borat" debuted at number one in the U.S. box office and went on to gross $300 million in box office and DVD sales. Industry experts are predicting an even bigger return for "Bruno."

The secret of the Baron Cohen comedy phenomenon may lie in his combination of laughs with something a bit deeper: namely his ability to highlight prejudices and hypocrisies.

"What he does very well is hold a mirror up to a lot of society's current ideals and expose them for what they are," Day told CNN. "That is one of the joys of his films.

"You can enjoy them on a simple level, in that they are very funny, but hopefully you also come away thinking, or maybe re-thinking some of your attitudes."