LONDON, England (CNN) -- He's been a homicidal singing barber in "Sweeney Todd: The Demon Barber of Fleet Street" and a drunken swashbuckler in "Pirates of the Caribbean: At World's End." 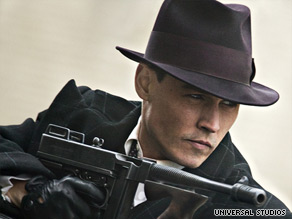 Depp is back as bank robber John Dillinger, revered in the Depression as a modern-day Robin Hood.

Now, Hollywood shape-shifter Johnny Depp is back as another unexpectedly charismatic outlaw: Depression-era bank robber John Dillinger, a character he says he's been drawn to since he was a boy.

"I sort of had a fascination with John Dillinger when I was about 10, 11 years old, for some reason," Depp told CNN. "I always kind of admired him, oddly."

Oddly, perhaps, because for a short but intense period between September 1933 and July 1934 Dillinger and his gang rampaged through the American Midwest, staging jail breaks, robbing banks, and killing 10 men and wounding seven along the way.

Mann is known for his sympathetic portrayal of criminals, and Dillinger -- whose acts on the wrong side of the law led him to become one of America's first celebrities -- is the quintessential good hood.

In the 1930s, the United States was in the grips of the worst financial disaster in history -- a time when many Americans watched their life savings disappear and became jobless and hungry.

Members of the public blamed banks for losing their money and politicians for failing to stop them. For many, Dillinger's exploits represented sticking it to the fat cats, and he was idolized as a modern-day Robin Hood.

J. Edgar Hoover, FBI director at the time, may have made Dillinger America's first Public Enemy No. 1, but the bandit was careful not to alienate the public.

There is a memorable moment where he drapes a coat over a female bank hostage during a raid to keep her warm. Also, it's said he never swore in front of women.

He was always courteous even as he tried to meet his target of robbing banks in under two minutes. Crucially, he never robbed the average guy, telling him to put his money away during robberies.

It is this Dillinger that Depp captures: a captivating revolutionary with the gift of gab who lit the public's imagination, causing people to flock to cinemas to watch his exploits in weekly newsreels. Review: Depp is great in 'Public Enemies'

Of course, the dark, violent side of Dillinger's psyche is unavoidable. Depp plumbed the depths of his own character to come up with those murkier elements.

That was something that took courage, according to Mann: "He had Dillinger in him; that's something I sensed. Deep in the core of Johnny there's a toughness."

Depp gained recognition throughout the 1990s for immersing himself in characters. He shook off an early reputation as a teen pin-up in movies like Tim Burton's 1991 Gothic tale "Edward Scissorhands."

He went on to cement his reputation for unusual film choices and quirky performances in films like "Charlie and the Chocolate Factory" (2005) and "Finding Neverland" (2004).

The 46-year-old actor says he felt a close affinity to Dillinger: "I related to John Dillinger like he was a relative. I felt he was of the same blood. He reminded me of my stepdad and very much of my grandfather.

"He seemed to be one of those guys with absolutely no bull whatsoever, who lived at a time when a man was a man."

"Public Enemies" was adapted by Mann from a nonfiction book of the same name by Bryan Burrough. Is it sozzled Captain. Jack Sparrow or smooth Donnie Brasco? Tell us your favorite Johnny Depp character in the SoundOff box below.

The "Last of the Mohicans" director is known for fastidious research and attention to detail, which in this case included collaborating closely with the FBI to check facts -- although Mann subsequently chose to gloss over some elements for the sake of the story.

Mann filmed in many of the locations where Dillinger's story took place almost 80 years ago, including the Biograph Theater on Lincoln Avenue in Chicago, where the bandit was finally shot dead by FBI agents as he came out of a Clark Gable movie.

They also shot at Little Bohemia Lodge in Manitowish Waters in the far north of Wisconsin, the site of one of Dillinger's most famous showdowns with the FBI.

Dillinger was hiding out there after a botched robbery. When the feds finally caught up with him, two men were killed in the vicious gunfight.

"We were able to shoot not just in the actual place where this happened, but in his actual room," says Mann.

"There's a certain kind of magic for Johnny Depp to be lying in the bed that John Dillinger was actually in."

A lot of Dillinger's success was down to superior guns and getaway cars. Depp, who has experience shooting guns from previous productions, had to learn a completely different technique for the heavy guns of the time.

Depp says shooting the Thompson submachine gun was one of the highlights of the production: "When you've got a beast like that strapped to you and you're emptying magazines, a 50-round drum, it's a good feeling."

The ride may have been thrilling for Depp but he also recognizes that the Depression-era setting has some extra significance these tight-belted times.

"You know," says Depp, "We're in the middle of a recession, teetering on a depression. It's time to view the banks and grown-ups for what they are."