LONDON, England (CNN) -- A schoolteacher from southern England with no previous filmmaking experience has given amateurism a good name by directing her pupils in a feature film fit for Hollywood. 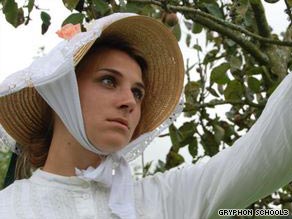 Alice Ralph, 18, stars in "Far From the Madding Crowd" as Bathsheba Everdene.

It has taken a year of hard work using only one camera, but teachers and pupils at The Gryphon School in Sherborne, Dorset, recently premiered their 110-minute long adaptation of English novelist Thomas Hardy's seminal 1874 work "Far From the Madding Crowd."

"When I watched it for the first time, it was actually quite an emotional experience," director/producer and Head of Drama Rosita Clarke told CNN.

"It's a kind of relief to see the efforts of what you've worked on and achieved an absolute reality."

Clarke is the driving force behind the project and says many people didn't believe she would be able to pull off a feature film when she first came up with the idea.

"Miss Clarke pitched the idea, and said she was going to make a feature film and we all thought she was joking," said 18-year-old Ben Jones, a Gryphon student, who plays Sergeant Troy in the film. "But we all kind of went along with it and it's turned into this."

Clarke was inspired to make the feature after she directed a play with some film footage in it the previous year. "I thought to myself, 'I'm going to make a film,'" she said.

After getting permission from the school, Clarke sat down with Hardy's book during the school summer holidays and over two weeks wrote a screenplay. In August 2008, Gryphon's Hardy feature went into production.

"Far From the Madding Crowd" unfolds against the backdrop of rural 19th Century England and tells the story of beautiful Bathsheba Everdene who inherits a farm from her uncle and finds herself loved by three men.

The feature was filmed over weekends, holidays and snatched evenings after school. It is full of exquisite costumes, gorgeous Dorset vistas and faultless acting from students aged between 16 and 18-years old.

Despite the demands of the shooting schedule, the students say they were able to fit in their schoolwork around it. "As far as the study goes, it's been ok," said Jones. Watch CNN The Screening Room's Myleene Klass report on the Gryphon School's London premiere

The pupils involved say it didn't undermine their studies, and in some cases helped it by giving them an invaluable experience in an industry they would like to work in in the future.

"Some of us want to get into the profession and this experience has been really valuable," said Jack Buckley, 18, who plays shepherd Gabriel Oak. "We haven't done any film acting before and it's very different to stage acting so we've learn a lot about that."

But the experience has not been without challenges: Using just one camera Clarke and her team had to film a fire in a 19th Century hayrick [haystack], work with livestock including sheep and shoot large crowd scenes.

In total 130 pupils worked on the film in roles from hair and make-up to walk-on parts.

Alice Ralph, 18, who stars as Bathsheba, says acting for the camera was one aspect that took some getting used to.

Emotional scenes shot up-close requiring convincing tears and restrained acting also proved a challenge for the students who are used to acting on stage.

"The emotional scenes were actually really difficult," said Ralph. "I found them quite hard to get, with the crying and things but with Mrs Clarke's help she put me in a situation and I'd use emotional memory and I'd get there in the end."

Clarke had no experience of filmmaking when she started up and used the Internet and books to learn about lighting and camera angles. She also picked up some tips on camera work from her 21-year-old son, Sunny, a broadcast production student.

Sunny also edited the film and Clarke says he had the editor's final word and helped her to keep the film slick.

"I wanted as many students as possible to have a little showing, and he's looking at it from a professional level of final finish."

The film cost a little over $11,000 (£7,000) to make, much of which Clarke raised from banks and supermarkets in the local community.

"We haven't had money and we couldn't get the sound right all the time and it got dark too quickly because we were trying to get it all done and it's just been so pressurized," says Clarke.

Nevertheless, she was always convinced she would successfully complete the film -- "It wasn't ever not going to happen."

For Clarke the best bit of the film is "the success for the students. What they're feeling. What they must be feeling. That just blows me away.

"That's what makes me proud and if I've helped them on their way."