(CNN) -- "Harry Potter and the Half-Blood Prince" hit thousands of theater screens across the country at midnight Wednesday. 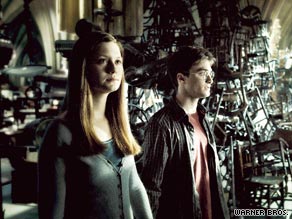 Ginny Weasley and Harry Potter develop a romance in "Harry Potter and the Half-Blood Prince."

Since then, fans have been buzzing about some of the film's most impressive scenes -- including one called "I killed Sirius Black."

In the scene, Potter is confronted by Death Eater Bellatrix Lestrange, who is creating mischief for both the boy wizard and his latest crush, Ginny Weasley. (Death Eaters are followers of the series villain, Voldemort.)

Exhilarating for some, but frustrating for others, this particular scene from the franchise's sixth installment is a cinematic creation, as it never occurs in the J.K. Rowling novel.

Watch the excitement of "Potter's" scene »

That aside, it includes pyrotechnic explosions, blazing fires, a massive chase sequence and the use of dark arts -- the Harry Potter version of black magic.

In this week's "The Scene," actors Daniel Radcliffe, who plays Harry Potter; Bonnie Wright, who stars as Ginny Weasley; and director David Yates comment on the action.