STRASBOURG, France (CNN) -- With his navy blue suit jacket and gray-tinged hair, Christian Engstrom barely stands out from the sea of delegates seated in the European parliament. 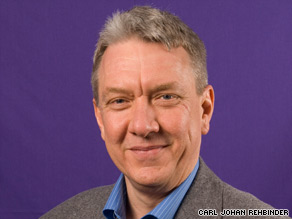 Christian Engstrom, deputy leader of Sweden's Pirate Party, is an elected member of the European parliament.

Yet the 49-year old Swede is a politician with a difference -- he is the world's first democratically elected Internet pirate, and the leader of a growing international movement that Hollywood sees as a major threat to its movie-profit "treasure chest."

In April of this year the Pirate Party gained international notoriety during a much publicized Stockholm court case, in which the founders of a file sharing site, The Pirate Bay, were given jail sentences and ordered to pay a fine to the entertainment industry.

The much publicized tribunal and its verdict helped the Pirate Party (which is not affiliated with The Pirate Bay) ride a wave of popular support that saw its membership total triple from 14,000 to 42,000.

In June these figures translated into electoral support, as the single-issue party reeled in 7.1 percent of Sweden's vote in the European elections, securing one of the country's 18 seats in parliament.

According to Engstrom, who is the party's deputy leader, their goal in Brussels is now to "ensure that Europe chooses a better road into the information society."

The party's ultimate aim is to deregulate copyright, abolish the patent system and decrease online surveillance.

Party members hold up Linux, the free operating system, and Wikipedia, the online encyclopedia, as examples of what has been achieved through collaboration on the Internet, even though the trend is still in its infancy.

Engstrom, a former computer software programmer, believes the Internet's freedoms and participatory culture are under threat.

"Things have been going in the wrong direction -- more surveillance, more control of everything we do on the net and also stricter copyright laws -- that's the wrong course for Europe," Engstrom told CNN. "We want to set a new one."

The prospect of reforming Internet laws has found particular resonance among younger voters. According to polls, nearly one in five Swedes under the age of 30 voted for The Pirate Party. Watch The Screening Room's piracy special online

The international film industry, on the other hand, is less than thrilled with the Pirate Party's objectives. They say global piracy is looting billions of dollars of their hard-earned profits every year.

A Motion Picture Association of America (MPAA) study from 2006 suggested that pirate "booty" amounted to more than $6 billion worldwide. In the UK, campaign group Respect for Film says $818 million (£500 million) is lost to piracy annually.

Since the early 1980s the major Hollywood movie studios, represented by the MPAA, have fought hard to eliminate piracy -- both in the form of bootlegging, and more recently online file sharing. Punishments for file-sharers have ranged from fines and Internet bans to jail time.

"They have approached [piracy] in a very stupid way," Engstrom told CNN. "They're alienating their customers, despite the fact that they are making more money than ever. Hollywood had its best year ever [in terms of box office revenues] in 2008, so why are they complaining? I can't understand that."

Members of the film industry contend that arguments like these don't tell the whole story. Lavinia Carey of Respect for Film says that while box office earnings may appear strong, DVD sales are suffering.

"If a box office success is trumpeted in the media on the opening weekend, it makes the public think that copyright theft isn't actually doing any harm," Carey told CNN.

"But very often cinemas are just a showcase for the more profitable end of the market, which includes DVD sales and sales to television companies."

According to Carey, the slump in subsidiary sales has had a domino effect on the entire industry.

"Employment is affected, people who are actually making movies are affected, and in the long term the consumer will suffer because we won't have the high-quality content in the future that we have come to expect," she said.

Engstrom and his fellow pirates feel little compassion for this line of argument.

"That's the way life is when you're running a business," Engstrom told CNN.

Should file sharing be legalized or it is nothing more than theft? Tell us below in the SoundOff box or join in the discussion on CNN's Facebook page

Engstrom's views appear to be striking a chord with young activists across Europe.

Since its foundation in 2006, the Swedish Pirate Party has inspired officially registered sister parties in six countries including Austria, the Czech Republic, France and Spain. Germany's "Piratenpartei" is the second largest, having snared nearly one percent of the German vote during the European elections.

While Engstrom is proud of his party's influence, he is not surprised by its swift achievements.

"It's been three and a half years working constantly on it, on a daily basis. To someone from the outside it may look like we just appeared, but it's not like that to us."

With an armada of pirate parties forming across the continent, the movement looks to set sail into what Engstrom hopes will be a bright future.

"It's now that the pirate movement begins. It's now that we want to reform first Europe and then hopefully the world."