'District 9' determined not to stick to formula

(CNN) -- Science fiction flicks featuring aliens can be a little formulaic: Aliens invade American territory, mass destruction ensues, and nine times out of 10, Will Smith rides to the rescue 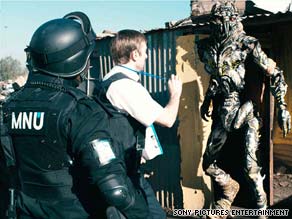 A company operative (Sharlto Copley) gets an alien's attention in "District 9."

But the alien-infested "District 9," opening in theaters Friday, takes things in a different direction -- if the producer may say so himself.

"In an industry that's looking to make movies out of every obscure TV show, or sequels, or video games, you look at 'District 9' and it's unlike anything you've ever seen," he said.

With its inventive plot and crowd-pleasing special effects, the low-profile, relatively low-budget ($30 million, a pittance these days) film was a hit at Comic-Con, creating a buzz before the film's release.

The brainchild of newcomer Neill Blomkamp, "District 9" is a mash-up of the director's love for science fiction with his rearing in an apartheid-divided South Africa. Set and shot in the shantytowns of Johannesburg, the film is a mix of action-movie shock and sociological food for thought.

The mayhem begins when an alien spaceship runs out of fuel over South Africa in 1981, and simply hovers idly in the sky. With no attack forthcoming, officials finally evacuate a group of aliens -- it turns out they've fled their home world -- and corral them into barbed-wire ghettos, effectively separating the shrimp-like creatures from the human populace. Overseeing the aliens' camp is the corporation Multi-National United (MNU).

It's an obvious nod to South Africa's own violent and divisive history, but director Blomkamp says he isn't aiming for political commentary.

"This is an organic thing that has grown out of me living in South Africa. I didn't want to go, 'Here's a whole bunch of people that have been oppressed by this apartheid-esque society' and beat people over the head with it," he told CNN. "I wanted to say, 'This is the city I grew up in, and this is what it felt like,' with a science fiction veneer to it so that it doesn't take itself that seriously."

Documentary-like authenticity was of prime importance to Blomkamp, and was the reason for his casting of fellow South African unknown Sharlto Copley as leading man. Copley has no prior acting experience, but critics have lauded his portrayal of Wikus van de Merwe, a private-sector employee who goes from being the oppressor to one of the oppressed after an accidental run-in with some DNA-transforming alien goo.

"Having grown up in South Africa, I was exposed to the tail end of apartheid as a child, [and] it's something I felt I could relate to," Copley said. "Playing the character, I saw so clearly how you discriminate. ... The film deals with things that are fundamentally human."

"District 9" is also fundamentally a thriller, and there's no shortage of gory, gritty scenes and clever special effects that will appeal to fans who like a little action with their sci-fi. Indeed, the film has been praised for its masterful use of special effects, weaving the technology seamlessly into the documentary-style scenes.

Sometimes the two are in the very same shot, Blomkamp said.

"One of the first shots completed was a motherboard shot, where [computer-generated imagery] was incorporated into some of the handheld footage, and it felt like it was working, this idea of handheld stuff with [CGI]," Blomkamp said. "It set a good tone; it captured the essence of what I was going for."

Not bad for a 29-year-old novice, who had previously directed short films and commercials. But that body of work was impressive enough to catch the eye of A-list producer Jackson, who originally had Blomkamp in mind for feature version of Halo, the video game.

"[Jackson] had received all of the crazy short films and commercials I had done, and once I met him and hung out and got familiar with the kind of filmmaking universe he set up down there, he did sign off on me as director of 'Halo,' " Blomkamp recalled.

But, five months into the project, the plug was pulled on "Halo." "Right away, [Jackson] said, 'If you want, you can stay in New Zealand and we can just keep the momentum going and allow another film to take place,' " Blomkamp said.

One of Blomkamp's friends suggested his short film, "Alive in Jo'burg," for feature treatment. Blomkamp ran with the concept, developing it alongside fellow screenwriter Terri Tatchell into "District 9."

"It's pretty cool," Blomkamp said. "I would've packed my bags and left had [Jackson] not said that."

It's been more than two years since Blomkamp started the project, and though he's found the experience exhausting, he has quite a final product to show off.

"There is nothing better than to come out the end of that process and have it play in a movie theater," he said. "For that first film, I got what I had set out to do, [and] that's a pretty awesome feeling."