ATLANTA, Georgia (CNN) -- When Ken Umeano went to watch the summer sci-fi blockbuster "District 9," he stormed out after 30 minutes. 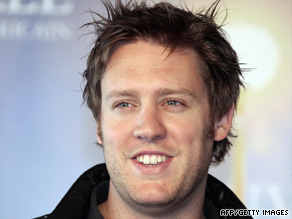 "District 9" was directed by South African filmmaker Neill Blomkamp, who also co-wrote it.

"I was so angry," said Umeano, a Nigeria native living in Atlanta. "They were showing Nigerians as corrupt, eating aliens, saying they have sex with aliens. I could not watch that."

The movie set in South Africa is a story about an alien space ship that breaks down over Johannesburg -- leaving the stranded creatures in a fierce battle with humans.

In the film, Nigerians jump at an opportunity to exploit the aliens, who are being kicked out by their South African hosts. A Nigerian gangster provides the aliens with a range of paid services including prostitutes, food and weapons.

The depiction has sparked an outcry, including a Facebook group condemning its portrayal of Nigerians. Officials in the West African country have banned it and are demanding an apology from Sony Pictures, the film's principle distributor through Tri-Star Pictures.

"Why do they want to denigrate Nigerians as criminals, cannibals and prostitutes who sleep with extra-terrestrial animals?" said Dora Akunyili, information minister. "We've had enough with the stereotypes they have branded us with ... we are not going to sit back and allow people to stigmatize us."

The movie will not be shown in Nigeria unless Sony apologizes and edits out any references to the country, she said.

Sony pointed out that Nigerian authorities cleared the film for release, and it screened in that country for two weeks.

"'District 9' is a work of science fiction, and no offense was intended toward any country or person," the company said.

The film was directed by South African filmmaker Neill Blomkamp, who also co-wrote it, and it was adapted from Blomkamp's 2005 short, "Alive in Joburg." "Lord of the Rings" producer-director Peter Jackson produced "District 9." Sony's involvement was limited to distribution.

Malawian actor, Eugene Khumbanyiwa, 33, who plays the top Nigerian gangster, defended his role in the movie.

"I was just doing my job as an actor," Khumbanyiwa said. "My job was to play a character as an underworld gangster and I did ... I'm just going to run away from this whole controversy."

Khumbanyiwa said the outcry was a surprise because his Nigerian co-stars did not have an issue with it.

The scenes depicting Nigerians make up less than 10 minutes of the 113-minute film. In some places, Nigerians are shown trying to eat alien flesh to cure illnesses and acquire superhuman powers. Khumbanyiwa's character is named Obesandjo -- which Akunyili said is an attack on former Nigerian President Olusegun Obasanjo.

Some Nigerians said the movie feeds off stereotypes associated with the country.

"Everyone has this image of Nigeria," Umeano said. "A lot of people have given Nigeria a bad name, but that does not mean the whole country is bad."

While Clement Nyirenda believes the director should have used a fictional country, he said the outcry is much ado about nothing.

After all, he said, the Nigerian movie industry, Nollywood, is filled with the same characterizations.

"The (Nollywood) movies show Nigerians as witch doctors, corrupt, a lot worse," Nyirenda said. "Nigeria is mostly known for 419 scams ... the government officials should focus on cleaning the image."

The term "419 scams" refers to spam e-mails that ask for money and bank information.

Akunyili said the country is trying to "rebrand itself away from such images." The Nollywood industry is undergoing a makeover, too, she added.

Blomkamp, who grew up in Johannesburg, told CNN last month that he didn't want the sci-fi tale about aliens and apartheid to be defined by politics.

"I didn't want to go, 'Here's a whole bunch of people oppressed by this apartheid-esque society' and beat people over the head with it," Blomkamp said. "I rather wanted to say this is the city I grew up in, this is what it felt like."