LONDON, England (CNN) -- Film producer Peter Katz doesn't just want his horror movies to scare you. He wants to pinpoint how frightened you are down to an exact moment in a scene. 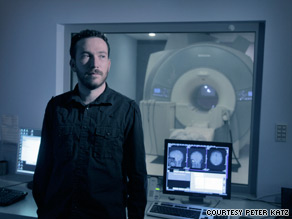 To do that, he recently teamed up with researchers and used MRI scans of brain function to determine the degree of fright caused by certain scenes from his latest horror flick, "Pop Skull."

For the experiment, researchers at functional MRI research facility Mindsign Neuromarketing, based in San Diego, California, scanned the brain activity of a subject while she watched two scenes of his movie. Analyzing the data from the scan, they were able to pinpoint the exact moments when her brain was lit up with fear.

Should movie directors use medical science to test audience reactions -- or go with their filmmaking instincts? Tell us

"I wanted to understand how we can make a horror film quantifiable," Katz told CNN, explaining the inspiration behind the experiment. "On the timing, I wanted to see just how precise we can get."

In search of better ways to reach their audiences, industries like marketing have been exploring the promise of brain research. Market research firm Nielsen made a strategic investment in NeuroFocus, a firm that applies neuroscience to advertising and product branding, last year. Watch Katz explain the experiment in a YouTube video

Now Katz is using the technology to better understand how people experience his movies. He thinks so-called neurocinema, while still in its early stages, could change the way films are made in the future and result in more interesting movies.

Mapping brain activity with fMRIs can help filmmakers identify not just whether scenes from a movie are working for audiences, but to what extent they are engaging with them, he told CNN.

During Katz's experiment, researchers analyzed scans to identify the exact moment during each film scene that the viewer's amygdala -- the part of the brain linked to several emotions, including fear -- was activated, and to what degree. Watch Katz explain the experiment in a YouTube video

The test subject reacted as expected to some parts of the film -- one scene designed to get audiences to jump out of their seats registered fear on the brain scan. But surprisingly, she showed just as much fear in the sequence that led up to that moment, he explained.

Los Angeles-based Katz, who has produced three horror movies, including "Pop Skull," believes neurocinema is a win-win for movie makers and movie-goers alike. Filmmakers get a baseline template for understanding what's effective and audiences get a more entertaining film.

But does tailoring a film so precisely to what viewers want spell the end of the art of movie making? Katz doesn't think so. On the contrary, he believes it will lead filmmakers to be more innovative.

"In every genre, there are formulas that are repeated that are no longer effective," he said. But filmmakers rarely know at which point they lose the audience's interest.

Many studios rely on focus group testing that involves viewers filling out a questionnaire after watching a test screening. The problem with this approach is that often audiences find it difficult to accurately remember and articulate how they felt about certain sequences.

Brain scans solve that problem, giving filmmakers a clear window into viewers' minds. It should help the people making films to identify scenes that don't work and adjust them to truly entertain the audience, Katz said.

As he sees it, the technology is applicable beyond the making of horror films: It could be used to make better dramas and comedies, he said, naming some of the genres that could potential utilize the technology to their benefit.

He isn't the only filmmaker contemplating the advantages of brain scans. Oscar-winning director of upcoming 3-D epic "Avatar" James Cameron told industry publication Variety last year that he believed "a functional-MRI study of brain activity would show that more neurons are actively engaged in processing a 3-D movie than the same film seen in 2-D."

Currently, measuring brain reactions to films is still in early stages. MRI scans can be costly, and getting a focus group to fill out a questionnaire after a screening is a lot easier than getting them to lie still and be scanned for the duration of a feature film.

Katz has tried out his experiment on just one subject so far, although he plans to further explore the technology in upcoming movie projects, which include another horror well as a sci-fi.

But he foresees brain scans playing an increasingly important role in Hollywood as studios -- especially those working on big-budget films -- face added pressure to deliver theatrical experiences that resonate with audiences.

For more auteur-driven fare, it may not necessarily make sense to use this technology, but, says Katz, it is also part of the evolution of filmmaking as it becomes more collaborative.

In today's social networking world, people have more influence than ever before, he said, especially when it comes to big-budget pictures, where success hinges on getting people into the theaters.

"Now more than ever you want to make sure that people are satisfied. You can kill a film over Twitter."

All About Horror Films • Hollywood