LONDON, England (CNN) -- Budgets spiraling out of control; cast and crew on the verge of collapse; sets destroyed: Just a few of the catastrophes to afflict the ill-fated productions in The Screening Room's Top 10 movie shoots from hell. 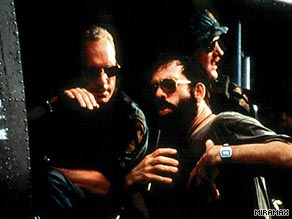 Robert Duvall and Francis Ford Coppola on the set of "Apocalypse Now." A typhoon destroyed the sets during this notoriously difficult production.

From "Cleopatra" to "Apocalypse Now," these infamous productions have all been struck by extreme weather, tragedy, illness and sometimes death.

Amazingly, despite the setbacks, these shoots didn't always result in failure. Some of these films are cinematic gems -- although this list has its fair share of flops as well.

Don't agree? Think we've missed one? Let us know in the SoundOff box below.

1. 'Apocalypse Now' (Francis Ford Coppola, 1979)
A typhoon that destroyed sets, illness and madness, all marred this notoriously difficult production in the Philippines. With no ending, an overweight Marlon Brando and his reputation on the line, Coppola withdrew into himself and the shoot spiraled out of control, according to his wife Eleanor, whose footage was used in making-of documentary "Hearts of Darkness." The shoot drove Coppola to breaking point and also took a toll on the cast -- star Martin Sheen suffered a heart attack aged 38.

2. 'Heaven's Gate' (Michael Cimino, 1980)
A disastrous Western that nearly brought down United Artists, the studio founded by Charlie Chaplin. Given free rein, Cimino overspent massively and the original budget of $8 million ballooned to a whopping $36 million. The historical drama eventually clocked in at three and a half hours. It was slammed by critics and bombed at the box office, paving the way for the sale of United Artists to MGM. Shaken by the extent of the failure, which is still considered one of the biggest in Hollywood history, studios clamped down on the freewheeling excesses of the 1970s and a new, more conservative era was born.

3. 'Fitzcarraldo' (Werner Herzog, 1982)
During this life-threatening shoot, Herzog made cast and crew haul a steamship over a mountain to tell the story of an music fanatic who wants to build an opera house in jungle. Herzog, who didn't want to use special effects, hired local Indians to achieve the feat. As if the challenge of pulling a 320-ton boat wasn't enough to deal with, the production was plagued by heavy rains, casting problems -- lead actor Jason Robards had to be replaced by Klaus Kinski due to illness, while Mick Jagger dropped out due to a Rolling Stones concert -- and a border war that broke out between Peru and Ecuador.

4. 'Twilight Zone: The Movie' (John Landis, 1983)
Tragedy hit the production of John Landis' feature film version of the TV series when a special-effects explosion caused a helicopter to lose control during a Vietnam War scene. Lead actor Vic Morrow and child actors Renee Chen and My-ca Dinh Le were killed when the helicopter crashed on them. Landis and other crew members were charged with involuntary manslaughter. All plead not guilty and were acquitted of the charges.

5. 'Cleopatra' (Joseph Mankiewicz, 1963)
The historical epic starring Elizabeth Taylor, Rex Harrison and Richard Burton nearly bankrupted 20th Century Fox. Shooting dragged on for years, with production being halted several times due to Taylor's illnesses. At one point, she nearly died after catching pneumonia and had to undergo an emergency tracheotomy. The movie had its fair share of scandal too, thanks to the affair Taylor and Burton started during filming. By the time the movie was finally finished, it had a new director (Joseph Mankiewicz signed on after Rouben Mamoulian resigned), was over schedule and way over budget. Some estimates put the final cost at $60 million, making it one of the most expensive movies ever made if translated into today's dollars.

6. 'The Man Who Killed Don Quixote' (Terry Gilliam, unfinished)
Terry Gilliam's attempt to bring Cervantes's hero to the big screen began unraveling from the first day of filming. Lead actor Jean Rochefort immediately fell ill, and if that wasn't calamitous enough, a flash flood washed away the entire set in northern Spain. Rochefort eventually ended up in the hospital and since co-star Johnny Depp had other commitments and couldn't wait for Rochefort to recover, Gilliam was forced to abandon the film. The whole shoot is chronicled in 2002 documentary "Lost in La Mancha." The ambitious director recently told movie magazine, Empire, that the project is up and running again and that shooting will begin next spring. No word yet though on who will play the man of La Mancha.

7. 'The Crow' (Alex Proyas, 1994)
This ill-fated production took a tragic turn after lead Brandon Lee died on set in 1993. He was shot by a misloaded prop gun. The untimely death of Brandon Lee, the son of martial arts legend Bruce Lee who suffered a bizarre death of his own in 1973 (father and son are buried side-by-side in Seattle), added an eerie dimension to the already dark film about a man who comes back from the dead.

8. 'Aguirre: The Wrath of God' (Werner Herzog, 1972)
It's no surprise that controversial director Herzog makes this list twice. While filming "Aguirre," he threatened to shoot Klaus Kinski when the actor tried to bail on the film. Herzog has said that as Kinski was packing this things into a speed boat to make his escape, he told him very quietly that he "would have eight bullets through his head before he reached the next bend of the river." While Herzog denies wielding a gun at the time he made the threat, he has said he did have a gun on set.

9. 'Dancer in the Dark' (Lars von Trier, 2000)
Lars von Trier has a reputation for being hard on his actors and for Icelandic singer Bjork's acting debut, he certainly didn't pull any punches. It's rumored that Bjork became so unhinged during the shoot that she ate her own cardigan. Von Trier has claimed that every morning Bjork would say, "Mr. von Trier, I despise you," and spit at him. The experience was so traumatic for Bjork that afterwards she insisted she'd never act again.

10. 'Three Kings' (David O. Russell, 1999)
Director David O. Russell and actor George Clooney are reported to have physically confronted each other on the set of this Iraq war drama over the filmmaker's treatment of an extra. Five years later, Russell famously blew up at veteran actress Lily Tomlin after she berated him while filming "I Heart Huckabees" in 2004 -- an episode that became a hit on YouTube. "I felt bad for Lily," Clooney said about the "Huckabees" incident to EW.com in 2007. "But I also felt a little vindicated for anyone that thought that that had anything to do with me on ["Three Kings"]. Russell, for his part, says he is not the biggest fan of movie stars. "Clooney went a long way towards that," he told UK broadsheet The Daily Telegraph in 2004.