Spike Jonze goes 'Where the Wild Things Are'

LONDON, England (CNN) -- Get your wolf suit out, channel your inner child and get ready to howl -- it's time for the wild rumpus to start. 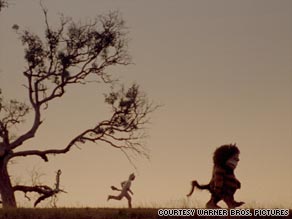 Critics have praised Jonze's film for its stunning visuals.

In adapting the timeless story, Jonze set out to make an honest film about childhood that resonates with adults and children alike.

"It was really brave to make a movie where you deal with kids and you actually deal with fears and you deal with the edge that you live in," Forest Whitaker, who voices monster Ira, told CNN.

The visually stunning film is inspired by Sendak's story for children, but it doesn't fit the prescription of a traditional family film, critics have noted.

See images from the film »

Jonze doesn't offer an idealized view of childhood. Instead, he focuses on the confusion and frustration felt by unruly Max as tries to capture the attention of his teenage sister and single mom, played by Catherine Keener.

Are you planning to watch "Where the Wild Things Are?" Would you take your children to see the film? Tell us in the SoundOff below

Outfitted in his white wolf costume, Max responds to his chaotic home life with howls and angry rampages, and one day escapes by sailing to a remote land where he discovers the wild things. EW: "Wild Things" is phenomenal

Jonze, whose work stands out for its physicality, describes the movie as an action film starring a 9-year-old. "I didn't set out to make a children's movie; I set out to make a movie about childhood," he has said.

Rather than follow a traditional story arc, the movie is anchored in the powerful emotional performances of Max, played by newcomer Max Records, and the ferocious monsters who crown him their king.

In addition to Whitaker, the movie features the vocal talents of James Gandolfini of "The Sopranos," Chris Cooper and Lauren Ambrose from "Six Feet Under" and Catherine O'Hara.

Watch Whitaker and O'Hara talk about making the movie »

Jonze's unconventional approach is rumored to have raised concerns last year among executives at Warner Brothers, who worried the film was too edgy and would frighten children. (Warner Brothers, like CNN, is owned by Time Warner.)

The Sendak original also stirred controversy when it was first published in 1963. Many librarians initially feared it would disturb children, although it's now become a timeless classic well stocked in bookstores and libraries around the world.

Sendak, who was a producer on the film, was involved early on in the project and urged Jonze, who he calls a "genius," to add his own mark to the legendary story.

"He has all the qualities that are unspoiled by Hollywood," Sendak told CNN at the film's New York premiere Tuesday night. "He's a real artist."

"Where the Wild Things Are" is only Jonze's third feature film. He made his directorial debut with "Being John Malkovich" in 1999 and followed that up with 2002's "Adaptation."

But he's spent more than a decade behind the camera shooting skateboard and music videos, including the 1970s-styled video for the Beastie Boys' hit "Sabotage."

Jonze's commercial background, which includes shooting ads as well as producing the gross-out, stunt-filled "Jackass: The Movie," hasn't detracted from his credibility as a film auteur.

A selection of his commercials and videos are part of the first ever retrospective of his work, currently being shown at The Museum of Modern Art in New York.

"Being John Malkovich," for which he was nominated for an Oscar, and "Adaptation" established Jonze's reputation as a director with refreshing originality.

But "Where the Wild Things Are" is his most ambitious film to date. The budget for the film, shot in Australia, is reputed to have been in the range of $80 to $100 million.

Turning a picture book into a feature length film is a challenge in itself -- and you can count the number of sentences in Sendak's book on your fingers -- but Jonze has done so in a particularly bold manner.

To make the 9-foot-tall monsters look as realistic as possible, he eschewed computer animation in favor of giant costumes puppeted by actual actors. Only their facial expressions were enhanced using CGI.

"Ever since he duct-taped an 8mm wind-up camera to a skateboard he's been quite the iconoclast," Tom Hanks, a producer on the film, told CNN.

"You can't take a 19-page little cartoon and turn it into a big motion picture -- as visual a motion picture as this is -- without some substantial amount of imagination and energy behind it."

As for the story, Jonze and Pulitzer-nominated novelist Dave Eggers, who co-wrote the screenplay, appear to have found unlimited inspiration from Sendak's story. (Eggers has even released a 300-page novelization of the screenplay.)

Jonze, who turns 40 later this month, interviewed several children get at the heart of what it's like to be a kid. Understanding what makes them tick -- when they get mad, how they deal with their parents -- is, ultimately, what the film is all about.

Most children's movies tend to over-explain and tell audiences how they should think and feel, but Jonze's film stands apart, said O'Hara, who provides the voice of Judith.

"You can interpret it in so many different ways according to who you are and what kind of wild thing you are," she told CNN.