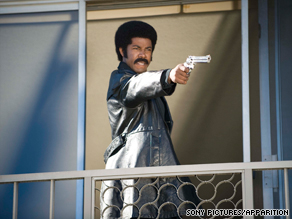 "The problem I have with the word is that it seems to encompass movies that don't fall under that category," White said. "As soon as you hear the title 'Shaft' people think 'blaxploitation' and that is absolutely unfair because that film was made before the term even existed."

White, the star and co-writer of the new movie "Black Dynamite," would rather people focus on what he views as the positives of the genre of 1970s urban action films starring African-American actors.

His new movie, which opened in limited release last weekend and will start going wider, follows the exploits of Black Dynamite, a former CIA agent who takes to the streets after his brother is killed by the mafia, orphanages are flooded with drugs and some bad malt liquor finds its way into the 'hood.

It is both a spoof of, and homage to, the genre whose films like "Black Caesar," "The Mac," "Foxy Brown," and "Superfly" have developed a cult following over the years.

"Black Dynamite" caught the eye of Sony Pictures at the Sundance Film Festival and the studio acquired the rights to distribute the film.

Director Scott Sanders said he has always been fascinated by the fact that while blaxploitation really only grabbed hold of the industry for about five years during the early 1970s, it was so influential.

"It was such an extreme genre with the look and the music and there were really no boundaries or rules," he said. "It's always been a fascination for me given how much it influenced hip-hop, black culture and culture as a whole, given the brevity."

White, best known for his roles in the films "Spawn" and Tyler Perry's "Why Did I Get Married," said he is a huge fan of blaxploitation films and views his movie as a loving send-up.

While he is aware that some of the films were unintentionally funny with their low-budget gaffes -- such as the appearance of mic booms in some scenes -- and their stereotypes, White said the genre is a valued part of the movie industry's history.

"These movies really saved Hollywood because the studio system was in trouble and they learned that they had a cash cow with these films," he said. "Later they exploited it by making any movie and throwing the term 'black' in front of it and that's what made it exploitive."

They also gave African-American actors a chance to work and reflected a people's pride following the gains of the civil rights era.

Laurence Washington, managing editor and co-publisher of Blackflix.com, said the movies helped young, black fans like him realize that "when we grow up we don't have to be train porters, busboys and waiters."

The films instead portrayed handsome, brave and suave black heroes who always got the girl, Washington said.

"When the blaxploitation films came out in the '70s, black audiences had never had action film heroes they could identify with," he said. "[The movies] also opened the door for today's black actors and directors to enter the mainstream."

Darius James, author of "That's Blaxploitation!: Roots of the Baadasssss 'Tude (Rated X by an All-Whyte Jury)," said blaxploitation films were like any other film that appeal to a specific audience, such as the indie movies of Roger Corman and Russ Meyer.

James said he grew up seeing civil rights workers beaten and hosed on television and the movies came out time when there was a sense of defiance and resistance against the marginalization of African-Americans.

White said he wishes there were more action films starring black actors these days. The films of the past were fearless and about true emotion, he said.

"The 'black is beautiful' movement had taken off and there was so much pride," White said. "When they called each other 'brother' they meant it."

"The heroes were strong, sexy and they kicked ass."

"I ask 'Where is that now?' I would like people to look at our film and say: 'Where are the black actors like that now?' "

Jay Potts, the cartoonist behind World of Hurt -- which bills itself as "The Internet's #1 Blaxploitation Webcomic" -- said he hopes "Black Dynamite" furthers interest in the genre.

And while "blaxploitation" is a convenient moniker to lump in films that may not have always had the best production value, Potts said they were a testament to an era.

"The films came out at a time when black people were learning about themselves and flexing their creative muscles," Potts said. "To me, there was a lot of fun, had a lot of energy and while it always wasn't perfect by any means there was so much life in it that I hope people take another look."