Elizabeth Taylor tweets praises of 'Michael's genius' in 'This Is it' 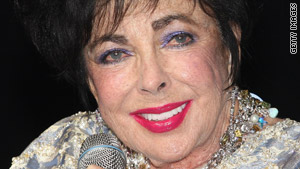 "I truly believe this film should be nominated in every category conceivable," Elizabeth Taylor, 77, tweeted Monday.
STORY HIGHLIGHTS

LOS ANGELES, California (CNN) -- It is an understatement to say that Elizabeth Taylor likes the new Michael Jackson movie "This Is it."

The legendary actress let loose with a flurry of 20 Twitter messages Monday afternoon, ending with her belief that, "This film should be nominated in every category conceivable."

Taylor, who doesn't get out much these days because of illness, said she screened the movie last week.

Here is an unabridged log of her tweets posted over a half-hour Monday:

"I was honored with the great privilege of seeing 'This Is It' last week. I was sworn to secrecy, but now I can let you know about it."

"It is the single most brilliant piece of filmmaking I have ever seen," Taylor tweeted. "It cements forever Michael's genius in every aspect of creativity."

"To say the man is a genius is an understatement. He cradles each note, coaxes the music to depths beyond reality."

"I wept from pure joy at his God given gift. There will never, ever be the likes of him again."

"And we have this piece of film to remind us forever and ever that once there was such a man. God kissed him."

"God blessed him and squandered nothing, but loved it all. Michael knew how to put together every tone, every nuance to make magic."

"To say he was a genius seems so little. I wish my vocabulary encompassed what I feel."

"You owe it to yourselves and your loved ones to see this again and again. Memorize it and say to yourselves, 'I saw genius in my lifetime.'"

"I loved genius in my lifetime. God was so good to me. I will love Michael forever and so will you, if you don't already."

"I hope I don't sound condescending. I'm sure you already know what I'm talking about, but go to see it again and again."

"If you listen to his lyrics they are those of a modern day prophet and it beseeches us to listen to him and what he sang."

"I won't use words like preaching because that is off-putting, but listen. Listen to his messages."

"From 'Black And White', 'Man In The Mirror'. The inspiration behind 'We Are The World'. We must take his words of responsibility seriously."

"Kenny Ortega did a masterful job of directing the process that goes into making a complete show before hitting the stage."

"From A to Z you get Michael's input on every level. Michael's genius at work with the dancers. Mr. Ortega catches Michael in his every mood."

"I truly believe this film should be nominated in every category conceivable."

Meanwhile, Sony Entertainment Pictures reacted to a tabloid report quoting Jackson's father questioning the authenticity of some of the movie's footage, with Sony calling the report "pure garbage."

London's News of the World tabloid published a short story Sunday that suggested members of the Jackson family were skeptical about whether the movie shows Jackson's true physical condition before his death.

"This movie features body doubles, no doubt about it," it quoted Joe Jackson saying. "I think people will tear this movie apart."

Joe Jackson's quote clashed with what one of his sons said over the weekend after seeing the film.

"My brother's movie 'This Is It' is truly riveting," Jackie Jackson said. "Michael is electrifying." In line for "This Is It?" Share your photos, review

"This story is pure garbage and there are no body doubles. Audiences will begin to see the film tomorrow and every time they see the King of Pop they will know that every frame is unquestionably and undeniably Michael as he rehearses and prepares for the London concerts that were to have begun this past summer."

The newspaper did not indicate when or where Joe Jackson made the statement.

The movie is based on about 80 hours of video shot in the three months before Michael Jackson's death on June 25. It captures Jackson's preparations for his London comeback concerts that had been set to begin in July.