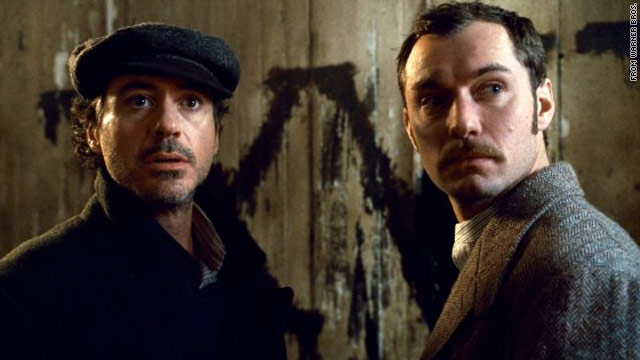 The British director, known for his now-dissolved marriage to Madonna as much as for his films, took the American and British actors to the Punch Bowl, his local London pub, so they could get to know each other well during filming.

"What was essential to me is that when these guys first met as mates that they really got on with one other, and they did -- within five seconds," Ritchie told CNN. "Rudy [Downey Jr.] and Judy [Law] and I had a lot of late nights in the pub."

His strategy seems to have worked -- off-screen anyway.

On the red carpet at the London premiere of the film, which opens on Christmas Day in the States and the day after in the UK, Law joked he was "in love" with Downey Jr., adding that "the flirting started the minute we met. It was based on mutual respect and admiration."

Downey Jr. plays Sherlock Holmes in the film and Law plays the super-sleuth's good friend and long-time sidekick, Dr. Watson. Sir Arthur Conan Doyle, the Scottish author and physician who created the stories, made the Holmes-Watson friendship one of the closest male partnerships in literature.

Rachel McAdams plays Irene Adler, a daring American woman traveling abroad and living on the edge of the law. Mark Strong, who was in two other Ritchie films, plays Holmes' nemesis, Lord Blackwood.

The film, a more action-packed rendition of the Victorian detective story, is also being pitched as a more loyal rendering of Conan Doyle's characters. Conan Doyle, first published in 1887, wrote four novels and 56 short stories that feature Holmes.

"Guy said to me, 'You're going to be a little bit more the Western martial artist that Sir Conan Doyle referred to Holmes as in the original text," Downey Jr. told CNN. "We're definitely not going for the bumbling, foot-in-the-wastebasket type character."

Law said, what was "thrilling was that, I discovered that we were going actually back to source material rather than inventing." The British heart throb said it was "very clear from the get-go that we didn't want to trample all over 100-or-so years of Conan Doyle legacy. We wanted to use that very much as the bible."

Asked how he reconciled fan expectations of a Ritchie film with studio demands on the film, Ritchie told CNN that Warner Bros. wanted "'Guyisms', so to speak."

He said he hoped his fans would be able to identify his "style of film-making" in the movie.

Writer-director Ritchie, whose 1998 hit "Lock, Stock and Two Smoking Barrels," followed by "Snatch," starring Brad Pitt in 2000, established him in the film industry, is known for cultish caper comedies set in London, his hometown.

Rachel McAdams said it was "kinda of liberating" to play a character that appeared in only one of Conan Doyle's stories.

"I had a lot less that I had to answer for, and a few less expectations on her character," she told CNN. "So yeah, I found there was room to move and create within that."

The Canadian actress, of "Wedding Crashers" and "The Notebook" fame, said she "combed the story for any kind of detail I could get as a jumping off point, but then it was kind of a free-for-all from there."

McAdams said she loved the "mystery" in her character. "You're not quite sure where she's coming from or what her intentions are," she said. "You don't know whether she's going to kiss you or kill you."

Ritchie said he was a fan of Conan Doyle's books.

Asked if he thought other Sherlock Holmes fans would be satisfied with his portrayal, Ritchie said what he was aiming at was what would entertain him -- as a diehard Holmes fan.

"I'd like to think it has that balance between being a film made for relatively smart people and at the same time, it's visceral and physical, so we have thought and action taking place," he told CNN.

"If I went to the cinema, this is the version of Sherlock Holmes that I would want to see."

Soon it will be evident whether fans agree.

Patrick Deane contributed to this report.