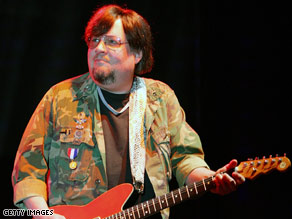 Ron Asheton helped form The Stooges in 1967 with his brother Scott and Iggy Pop.

The 60-year-old's body was found in his Ann Arbor, Michigan, home after a caller phoned police saying they hadn't heard from him in a few days. Authorities are investigating the cause of death, but foul play is not suspected.

The Stooges were founded in 1967 in Ann Arbor by Iggy Pop, Asheton, and his brother, Scott Asheton. Though never a major commerical success, the band has been cited by artists like Thurston Moore of Sonic Youth and Jack White of the White Stripes as a major influence.

The Stooges are nominated for induction in the Rock and Roll Hall of Fame, with inductees set to be announced later this month. They reunited for a series of shows in 2003, and released a new record, "The Weirdness," in 2007.