NASHVILLE, Tennessee (CNN) -- A singer took center stage at a Nashville honky-tonk to promote his new album. He had the good looks and easy charm of a movie star. 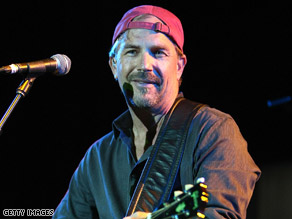 Kevin Costner is putting his energies into music. His new record is "Untold Truths."

Only in this case, he was a movie star.

Kevin Costner recently celebrated the release of "Untold Truths" -- his debut country record -- with a free show at The Stage on Broadway. He was backed by his band, Modern West, which also features guitarist John Coinman and bassist Blair Forward -- two men he met 20 years ago in an acting class. The three have been making music on and off since then, with Costner on lead vocals and rhythm guitar. Back in the day, they called themselves Roving Boy.

Truth be told, the 2008 incarnation -- Kevin Costner and Modern West -- does not sound like a movie star's vanity project. It's contemporary Americana set against a Western backdrop. Costner sings about freight trains, dusty avenues and broken dreams in a voice that's pleasant, if not terribly distinct. In faded jeans and a toffee-colored cashmere sweater, he commands the stage with the same understated sex appeal he has on the big screen.

At 53, Costner is the soft-spoken, heroic everyman we've seen time and again in such movies as "Dances With Wolves," "The Bodyguard" and "Field of Dreams" -- except today he's wielding an acoustic guitar instead of a baseball bat. The mission statement from "Field of Dreams" seems to apply to his philosophy as a recording artist: "If you build it, they will come."

Plenty of fans did come to his show that night, but earlier in the day, we caught up with the busy superstar during his rehearsal -- which he had opened up to a group of local college students in a Grammy-sponsored "SoundCheck" session.

Listen to Costner kick it with his band »

CNN: Even though your album, "Untold Truths," is being marketed as a country album, your sound is really more rootsy than traditional country.

CNN: What made you decide to put out an album?

Costner: My wife said, "Look, you are the happiest by far when you are making music. Why don't you keep on making music?"

CNN: People may not know this, but you've been making music for a long time.

Costner: Yeah, for a long time. I have been doing a lot of things for a long time. (chuckles) It's not like we called up and said, "Hey, we have a garage band. Can we show up?" We have been working really hard at this for three years. All of it has been under the radar just because we have not felt like publicizing it. It has kind of happened in the way we wanted it to -- which was more of a grassroots situation, people discovering the band.

CNN: When you were talking to the students, you spoke a lot about being fearless.

Costner: Their choices are going to be questioned not only by their colleagues, but by their parents. You only get one shot at this life. They can go to college and learn a lot of things, but they should also be encouraged to try things, even if they don't succeed. I am trying -- even if I don't succeed. You know, failure is completely underrated in America. (smiles)

CNN: With this new project, there's the possibility of having your head handed to you on a platter.

Costner: Well, that will happen no matter what I do -- so I'm not worried about that. I have to get over my own bar on what I think is acceptable.

CNN: And what is that?

Costner: I don't know. It's just a moment when you feel you've given an honest effort.

CNN: You have trouble stuffing everything you want into a three-hour movie, let alone condensing things into a three-minute song. How do you --

Costner: I don't have that hard a time!

Costner: Yeah, a long time ago. Blair (his bass player), the same. Like anybody with good sense, you keep people who have been really true and honest with you around you.

CNN: Which is more cutthroat, the movie business or the music business?

Costner: There is cutthroat stuff in everything -- these corporations going under, and people ducking for exits, pointing fingers. You know, it is a cycle of life. Then someone else will take that spot, some heavy hitter. Maybe it is good to take a lesson. You have to be a little humble because maybe one day, you are not that big, swinging dog you think you are.

CNN: Do you ever feel like that in your own career?

Costner: Well, I am aware that a career that takes chances isn't always going to ring a bell. It is not the greatest risk in the world to not be the most popular person, or the number one person, because that is a pretty fleeting thing to begin with.

CNN: Do you read reviews?

Costner: No. Sometimes they are read to me. "Look what he said!" I am like, "Please don't show me."

CNN: Are you planning to make more albums?

Costner: I will be making more music. We'll see where it lands. We made a record. We made it as good as we could make it, and now we let it go. And we go and write a better song.

CNN: In the meantime, you have a show to put on.

Costner: There is a moment for two hours when you are really burning, and that is a great feeling. Some people like to jog because that somehow does something for them. When you perform, for me, it's like filling up the gas tank.

All About Kevin Costner • Music