WASHINGTON (CNN) -- Sasha and Malia Obama had front row seats for Monday night's Kids' Inaugural Concert, but jumped on stage when the Jonas Brothers invited them up. 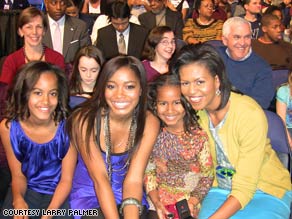 Michelle Obama and her daughters pose with actress Keke Palmer at the Kids' Inaugural.

"Are we fired up in here?" Michelle Obama asked as she took the stage halfway through the two-hour show. "Are we ready to go?"

Obama called on the young people to play a part in their country's future now, in activities such as volunteering at shelters for the homeless, visiting elderly neighbors or writing letters of support to troops overseas.

"We all have something incredible to contribute to the life of this nation," she said, adding, "And kids, this means you, too, right?"

Sasha, 7, kept her camera ready, getting photos of her favorite teen stars.

While the Obama daughters have met many of the stars along the campaign trail in the past year, it was their first time to meet singer-actress Keke Palmer, a presenter at the show.

Palmer, 15, said Michelle Obama told her "she was really proud of me."

Most of their backstage talk was about Palmer's movies and TV show, she said.

Like the Obamas, Palmer is a Chicago, Illinois, native.