(CNN) -- Even though she was 4 years old at the time, Deborah Gouin remembers it like it was yesterday. 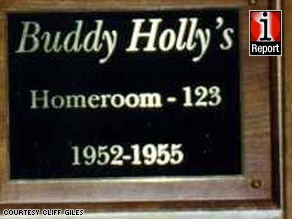 "My mother would listen to this light brown Zenith radio every morning to see if the school was closed," she said of her childhood in snowy Michigan.

Gouin asked her mother, "Who's Buddy Holly?" Her mother explained that he sang "Peggy Sue."

Gouin remembers her brother being saddened at the news. "My brother was at the age where he was interested in rock 'n' roll music, and would play the new songs on his trumpet."

It was February 3, 1959, a day that would be immortalized more than a decade later in the Don McLean song "American Pie" as "the day the music died." Holly, as well as fellow rock 'n' roll musicians Ritchie Valens and J.P. "The Big Bopper" Richardson, lost their lives in a plane crash early that morning. It is often recognized as the end of an early era for rock 'n' roll music, and iReporters shared their thoughts on on that tragic day and what it meant.

In Gouin's case, she discovered Holly's work later in life. She owns a five-volume set of his work.

"I'm totally a huge fan of Buddy's music," she said. "It was a huge loss. I think he would have had an even bigger influence on music if he had lived." iReport.com: Gouin shares her memories of that day

Beverly Cummins clearly remembers hearing about the tragedy as well. Her sister and cousin had spent the night at her house. "My cousin had a crush on Ritchie Valens and played his 45 record 'Donna' the night before, among others."

That morning, she heard her cousin screaming as a radio station delivered the news. "I heard it for myself about an hour later," she said. "It was stunning, and I started crying because she was crying. Even though I was 7, I knew what death meant."

Her cousin continually played records by Valens "while young and old tried to absorb how a series of tragic circumstances could have taken these three so young and full of life and promise."

Cummins said her cousin had her friends over for a memorial sleepover. "They even got the Ouija board out to see if they could contact them. It was quickly put away when it scared everybody enough.

"I can hardly conceive that 50 years have passed since this defining moment in my own little life." iReport.com: How teens of the time paid tribute to the trio

Cliff Giles attended Lubbock High School in Lubbock, Texas, the same school Holly had attended a few years earlier. He was eating at a nearby restaurant when he heard the news. "I remember thinking that it was a shame his life and career ended so quickly," he said.

Giles never met Holly but became a fan of his music from listening to the radio at the time. "Like most teenagers then, I liked his early, up-tempo music best," he said. "I remember kids complaining about how he had turned soft with the orchestra-backed album." iReport.com: Concert re-creates final tour

Giles, a pilot, said, "It's probably easier for me to imagine the panic that gripped the very young pilot as he came to realize that he had lost control of the airplane on that dark and stormy night, and how easily it can happen."

During the 40th reunion of his high school class, Giles toured the building where both he and Holly received their education.

He says, "I'm proud of the photo that my son -- also a Buddy Holly fan -- made of me standing by a plaque commemorating Buddy's homeroom." iReport.com: Read more about Holly's fellow alumnus

Robert Graham grew up in his parents' record shop in the 1950s and remembers listening to Buddy Holly's music often. He said Holly "wrote about what you were living at the time, what kids were going through," and that's why his death affected so many.

He remembers his sisters, who were 11 and 13 at the time, crying upon hearing the news. iReport.com: Watch Graham remember early era of rock

George Spink, a freshman at the University of California, Santa Barbara in 1959, was listening to the radio as usual when the news was announced.

"We couldn't believe it. It just seemed unreal," he said. "It was really sad to hear that three of them were killed at one time. Plus, these guys were only four or five years older than me."

Later that day, Spink saw his girlfriend. "She was crying her eyes out because she was such a big fan of Buddy Holly." iReport.com: College student talks about being named Peggy Sue

Spink enjoyed the Big Bopper's music, in particular. "He had a good sense of humor; he was fun to watch and didn't seem to take himself so seriously."

Spink remembers being first drawn to rock 'n' roll music around the time "Blackboard Jungle" was released. The 1955 film included the song "Rock Around the Clock" by Bill Haley & His Comets.

"That was big among my friends in high school," Spink said. "We really liked a lot of rock and roll, rhythm and blues especially."

As he was posting his iReport, Spink listened once again to some of the music of Holly, Valens and the Big Bopper and says it still holds up today. "I have a lot of good memories of when rock 'n' roll first began, and they were a part of it." iReport.com: "The day what music died?"

Spink also recalls McLean's 1971 song with the famous lyrics about "the day the music died."

All About Buddy Holly • Ritchie Valens