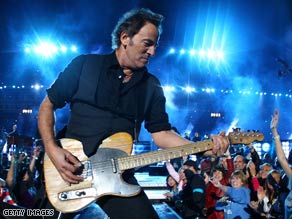 But still: CNN.com users who responded to our iReport and blog queries about the possible Ticketmaster-Live Nation merger were really, really unhappy.

"Put 'going to a rock concert' on your list of 'Things you used to do, but can't anymore,' along with watching free television, seeing a double-feature with a cartoon, and riding a train cross country," wrote Carlos Sandoval.

"Ahh, the beginning of yet another monopoly. I hope the feds nix this one," added RJ.

Many who commented were compelled to share their horror stories, of which there were many.

"I was recently at a concert where I sat at the top of the stadium -- read: the WORST seats," wrote Kim Levering. "And I was surrounded by people who had bought their tickets through a Ticketmaster pre-sale. So lemme get this straight ... Ticketmaster rewards its customers and loyal fans by providing them with the worst seats in the house (even when selecting 'best available') during a pre-sale?"

"I hoped Live Nation would provide competition for Ticketmaster and the outlandish surcharges and service fees," wrote avettbrosfan. "Unfortunately, when I went to buy a '30 dollar' lawn ticket to see the Avett Brothers and Dave Matthews Band, the Live Nation surcharges bumped the ticket up to 52 dollars! So much for that hope." Read more comments on the Marquee blog

Other people wrote of being forced to pay $100 surcharges, of being sent to other ticket sites (including Ticketmaster's own premium site, TicketsNow) and of all the other costs to go to a concert, such as parking, refreshments and merchandise. iReport: Your reaction to the possible merger

"Here in L.A., the [Bruce Springsteen] TicketsNow tickets were available immediately when the tickets when on sale. Those seats were never available to the public to begin with. 'Reputable brokers' means 'really just us using a different name,' " wrote Mauricio Heilbron Jr., M.D.

Still, Ticketmaster had its defenders. The company's Web site is clean and simple, and it beats the old days of camping out at stores, wrote Steve.

"I remember all too well those days of standing in line for hours at Dillards to get to their Ticketmaster outlet, and still getting lousy tickets," he said. "I'll be glad for the day when all tickets are available from one single outlet online."

Lost in all this is the impact on musicians, who seldom have a choice regarding ticket sellers at large venues. Pearl Jam had its protest in the '90s; Bruce Springsteen sounded off on the sales snafu for his 2009 tour. But in general, if you want to see -- or play -- a concert, there aren't many options.

"I could have gone on for hours about this. The fact is, I would love to change my purchasing plans, but how can I? If I want to see a show, what option do I have?" said musician, and music fan, Brian Riback on iReport. iReport.com: Read more of Riback's comments

"Sure, I can purchase off of Stubhub or Craigslist ... but I don't want to pay even more than I'm already being ripped off. The other end is even if I'm purchasing second hand...the original purchaser still supported [Ticketmaster/Live Nation] ... so I'm damned if I do and I'm damned if I don't," Riback said.